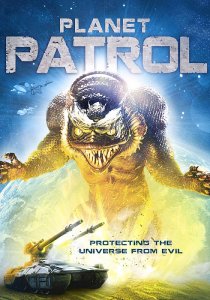 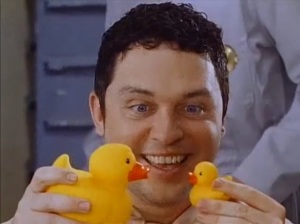 The film then moves on to what I initially expected the entire film to be: a condensed, 25-minute version of Kraa! the Sea Monster, which is to say, a far better version of Kraa!. Gone are all the dumb, fluff scenes used to pad the film to a feature-length runtime. Gone are all the gratuitous and unnecessary slow-motion footage of Kraa! walking around and flailing his arms! It’s pretty much all money shots at 25 minutes, so I actually enjoyed this segment, if only because I got to re-watch the best parts of Kraa! without the bullshit.

But they couldn’t stop there while I was still enjoying the movie, could they? Nope! By removing all the padding from the Kraa! footage, Planet Patrol needed some padding of its own. This comes in the form of the final segment, featuring the scorpion robot and its battle with the humanoid robot from the sorta sequel to Robot Jox, Robot Wars. Now, I greatly enjoyed Robot Wars, and I love a good stop-motion robot crunching into another stop-motion robot. The footage here is still as great as it always was, but the new scenes with the Planet Patrol just get in the way. 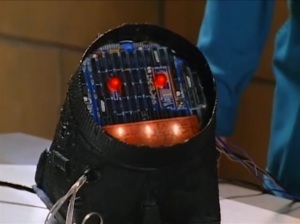 Y’see the Planet Patrol, for all their supposed accomplishments and talents, are just a boring bunch of teenagers flying around space in a spherical ship that looks like what would happen if the Borg had built the Death Star. These are supposed to be our heroes but their characterizations are so slight and uninteresting that I would have actually preferred a movie completely composed of Full Moon stock footage to one with these guys inserted.

If you’ve never seen the films where the footage originates from, Planet Patrol may be quite the entertaining B-movie. If you’re a kid. Maybe. But if you have seen those films, then Planet Patrol is nothing more than a horrible attempt to sell you a new movie when there really isn’t one. Thankfully, they never produced the sequel that the ending (which is actually the end of Kraa! the Sea Monster) points towards, because with the amount of movies in the Full Moon universe there literally could have been hundreds of “planets” for these teens to “explore.”

Oh, and in case you were wondering, in between finishing Kraa! and this film they apparently fixed the shots where the green screen was visible, but that timecode in space was still hanging around! Phew, I almost thought they cared there for a second.

Next time I get around to a Full Moon movie, I’ll be checking out their most recent outing: the episodic series/film featuring the great scream queens of the past, Trophy Heads! See ya then!