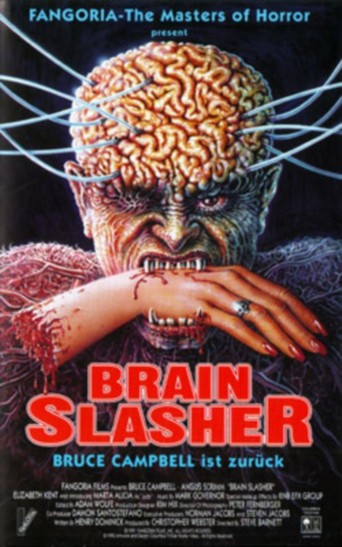 So after that rousing synopsis you’re probably thinking that Mindwarp doesn’t sound all that bad, and honestly I would agree. But somewhere in the translation from story to film the excitement was lost. Most of the film is underground in the caves of the Crawlers, and nearly all of that footage is horrendously lit. It’s easier to describe what wasn’t lit because that makes up about 80% of the screen at any given time. Most of the time it’s too dark to make much out, and to add insult to injury the film also carries the very specific look of an LCD computer monitor when viewed at the wrong angle. I kept readjusting my position in hopes that this really was the issue, but from whatever angle you look on Mindwarp it’s the same. (This is probably a good time to note that this issue is probably due to the poor quality VHS transfer I watched. The film was recently released to Blu-ray in a limited edition by Twilight Time, and screenshots of that release look noticeably better.)

Bruce Campbell plays a survivalist who saves Judy from her first encounter with the Crawlers, but this rugged character is poorly drawn. He’s completely without charisma, which makes me wonder why the hell they’d bother to get Bruce Campbell if they weren’t going to allow him even an inch to make the character his own. Bruce plays the role fine, but the role just doesn’t suit him. And he only has a few handfuls of lines in the whole movie! Boo! On the other hand, Judy (Marta Martin), gets a shit-ton of lines and her acting abilities are… I’ll be nice and call them “debatable.”

Mindwarp also features Angus Scrimm of Phantasm fame (phame?), and while his character isn’t anything particularly special, he does get a lot more to do than Bruce. Scrimm plays the leader of the Crawlers and his scenes are the film’s best, as he passes judgement on the community’s wrongdoers by sending them to a juicy death via a huge spinning fan at the end of a chute. And while he performs these judging duties, he wears a weird Leatherface-esque hood and a glove on one hand that adds Freddy Kreuger claws to a couple of his fingers. It sounds dumb to type it out, but it looks suitably creepy in the movie.

But the worst offense that Mindwarp inflicts on its audience is that for a genre film with a fun premise, genre-favorite actors, and arguably the best and most prolific practical FX studio ever, it’s just no fun. It’s a slog. The moments of gore are wonderful and surprisingly plentiful, but even these bursts of blood can’t elevate the film out of the dank cave it’s set in. On the surface you might think that a twisted, post-apocalyptic version of The Time Machine would be a good idea (and it still might be!), but Mindwarp is definitely not the film to prove the point.