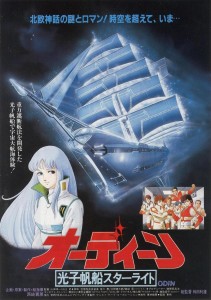 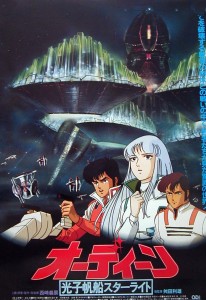 I rather like the concept. Somebody on the moon or someplace shoots a huge laser along the travel route, and the ship latches onto the beam with special sci-fi sails so they can be dragged along for the ride. I doubt it’s a wholly original concept, but it is cool and gives a good excuse for why the title spaceship, the Starlight, looks like an eighteenth century pirate ship. I just wish they had used the concept for something more than an excuse to rock out for a few minutes while displaying the name of whatever cool new mode of propulsion they decide to use, from “laser rout sailing” to “high energy sailing” and then to my favorite: “gravity isolation sailing.”

I would have liked the pirate ship motif a lot better if it hadn’t been done before by Leiji Matsumoto, one of the most iconic sci-fi writers of Japan. What the movie doesn’t steal from Matsumoto, it steals from Macross’s story of aliens related to humanity trying to destroy the world. But most of its, let’s be kind and call it inspiration, comes from Matsumoto, like the mysterious pretty girl named Sarah who reminds me too much of the alluring blonde woman who triggers the events of the Yamato series. 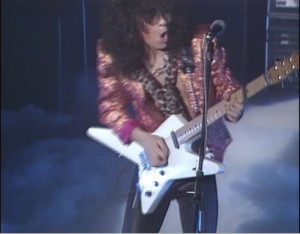 Rather than just setting the characters on their journey, Sarah primarily acts as a crutch for the plot. Whenever the crew gets lost or trapped, Sarah just points them where to go. A new alien language that no one can understand? That’s OK, Sarah can magically tell us what it says. Should we mutiny and take the ship on a joyride to another solar system? Sarah says yes, so let’s do it! It’s all a little too convenient, as are the battle scenes which inevitably don’t cause as many problems for our intrepid explorers as they should. Never mind that the humans are on one lonely prototype ship armed with makeshift laser cannons put together from repair tools and communication gear; they have little trouble wiping out an entire fleet of advanced alien warships.

There are lots of action scenes in the last half of the film, but they never manage to feel like anyone is in any danger, which saps all the tension out of the movie. It has a bad case of “good guys never get shot” syndrome. So despite the frantic action, explosions, and fast-paced soundtrack, it just doesn’t satisfy. It all feels too staged, and the final battle feels like little more than a rock concert with a lot of pyrotechnics on display. Odin is mostly just a really long music video for Loudness, the band that performs all the music. That fact is especially hammered home when the end credits start showing clips from one of their music videos. Considering the number of videos Loudness has on YouTube, they must have met with some level of success in Japan.

How much entertainment you can squeeze out of Odin will be directly proportional to how much you like terrible, superb ’80s rock. The film itself is pretty bad, but it does have a good chunk of what Will labels “B-movie fun.” I have a soft spot for cheesy rock n’ roll, so I was able to laugh my way through most of this movie and have a good time, but if you aren’t up for an ’80s nostalgia trip, then you’d better leave this one alone.

I couldn’t find a trailer, but I did find a music video of the main theme which you will hear at least five times over the course of the film, along with that awesome boarding sequence.