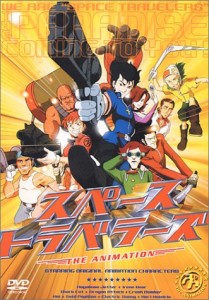 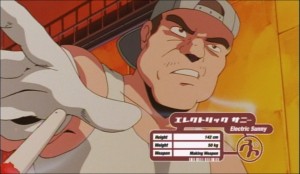 The basic setting is a future dystopian Earth that was taken over by… someone. Is it an alien invasion? Maybe a rogue nation taking over the world? A robot revolt against their human masters? The film doesn’t seem to care, and it doesn’t expect anyone else to either. All we ever see is a robot army and space ships that are giant rectangles which trump even the Borg at featureless flying geometric shapes. The only thing that matters is that the bad guys built a ring system around the Earth that has blown the surface to hell and tries to kill anyone coming or going.

Enter the Space Travelers, a gang of smugglers who will brave the deadly hordes to deliver cargo to the beleaguered people still living on Earth. And this is where the film turns to pure fun as it introduces the team in the opening credits via a montage of epic music and action scenes showcasing each character’s unique ability to kick ass, then pauses at a perfect dramatic moment and plasters their name and a list of facts about them over the screen. Now that’s how you open a film! 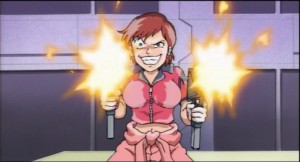 And what names these heroes have! Names like Crush Bomber, Dragon Attack, and Electric Sunny. If that doesn’t put a grin on your face, you seriously need to reexamine your ability to have fun. What really sells it, though, is just how expressive the characters are. They plow through waves of robots with the biggest shit-eating grins. Except Dragon Attack. That guy always looks PISSED OFF at absolutely everything. The characters are so infectiously expressive that it’s virtually impossible not to get caught up in the excitement. As dumb as this film is, and it is pretty dumb, it’s all in the name of good fun. And what better goal could a movie have than that?

This exuberance completely makes up for the lack of quality. There are plenty of gun fights and space battles, that is the whole purpose of the film after all. They aren’t done particularly well, but they’re so filled with gusto that I didn’t really care. Every fight is filled with cocky grins and laughter. Every space battle has to catalog what percentage their shields are at and how long it will take them to recharge. 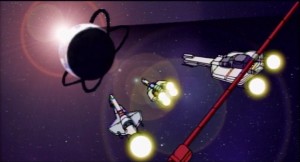 The plot is barely there, existing for no other reason than to hold the action scenes together. But if you really care to know, it’s about a special shipment the Space Travelers are charged with bringing to Earth. It could be the one thing to finally free the Earth from alien/foreign/robot/god-knows-what oppression. But the guy hiring the Space Travelers was kidnapped by robots, the package gets damaged during transit, and the ever-invisible bad guys are after them. So our intrepid heroes are in for a challenge. Not that something as simple as the fate of the world will stop them from cackling like psychopaths while blowing up legions of robots.

It’s all a bunch of generic action, and it even has an obligatory combining sequence just for the hell of it. The film gets by on attitude alone, but that was enough for me. I maybe shouldn’t have had as much fun with Space Travelers as I did, but I guess it hit my inner ten year old just right. I had a blast with it, and it was certainly much better than I ever expected it would be.