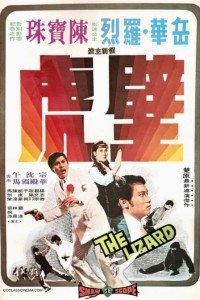 It’s all a lot of fun, but it does come with a problem. While Intimate Confessions of a Chinese Courtesan was able to soar as a kung fu drama by hitting high dramatic notes amidst skillful martial arts battles, The Lizard does not stand tall as a great comedy. This isn’t entirely the film’s fault as many of the jokes were clearly lost in the translation. A few weren’t translated at all, as certain signs were shown without subtitles and from the context it is clearly supposed to elicit a response from the audience. This is unfortunate, but I can only call it like I see it. I welcome any Chinese speakers to enlighten me to anything that I may have missed.

But while The Lizard falls a bit short in its comedy, it does deliver some great action. There’s not a bunch of it, but when action comes to you courtesy of the fearsome duo of Yuen Cheung-Yan and Yuen Woo-Ping you better be ready! The Yuen brothers pull off some great work, crafting fights that are exciting and that play quicker and seemingly much more realistic than a lot of other fights from this era of the Shaw studio. I can’t say that there’s any real standout moments, though, it’s just across the board great quality stuff (but still rather subtle).

The best parts of the film were the thriller portions when The Lizard came out for a little heist action. The first of these is superb, as The Lizard vows to steal a diamond necklace at the strike of 9 pm in the middle of a huge party teeming with policemen. The pieces are well into motion long before he reveals this bold claim to the partygoers, though, making for a tense scene that accelerates the remaining film considerably.

I liked The Lizard pretty well, but it failed to capture me completely. It’s very lighthearted for a kung fu film, which definitely threw me for a loop. Perhaps I’ll enjoy it more on a re-watch. Also of note is that The Lizard was the final film of Connie Chan Po-Chu, a huge star in the Hong Kong opera films of the 1960s. She plays the lead female role in the film and gets to show off some great martial skills throughout. In any case, if you’re a fan of Chor Yuen, Yueh Hua, Connie Chan Po-Chu, multi-genre films — you get the idea — The Lizard is definitely worthy of your time.

Next up in this chronological jaunt through the Shaw Brothers Martial Arts catalog is Chang Tseng-Chai’s The Fugitive! Chang’s previous film in this series, The Casino, was quite the unsung, quick-moving gem so I’m hopeful this one will be similarly good! See ya then!