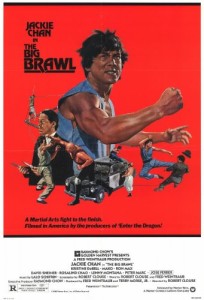 The sad thing is that none of this would matter if The Big Brawl let Jackie loose in its 1930s setting. This was his first film set in modern times, but unfortunately Jackie’s frustration is almost palpable on-screen. Even during the fights when he’s kind of allowed to be himself, there’s only shreds of his potential being used. Jackie relates a painful story in his autobiography, stating that improvisation was key to his workflow in Hong Kong and that he would see ways to spice up the film while getting ready for a take. Director Robert Clouse (who also made Enter the Dragon) refused to allow him any input of this kind. Where Jackie wanted to do a couple rolls and a backflip, Clouse told him to simply walk from point A to point B. It’s all well and good now, looking back, but I’m sure at the time Jackie felt like the freedom he had felt with Yuen Woo-Ping and on his films as a director was going to be just a small footnote to his disappointing career under directors who didn’t understand him. Thankfully, it didn’t shake down that way, but it easily could have.

In I Am Jackie Chan, Jackie also admits that before he landed in America, just two weeks before shooting of The Big Brawl began, he knew no English at all. He took a crash course to be able to speak his lines in the film. This explains a lot. Even without this knowledge, while watching the film something definitely seems off. The rest of the Chinese actors all seems to be American, that is to say that their English is perfect. This ends up being somewhat distracting as Jerry’s thick accent makes little sense given the rest of hs family speaking English so well. If they framed the story as Jerry just coming to America it would have been more believable, although Rosalind Chao (Keiko from Star Trek: The Next Generation/DS9!) is one character in just such a role, and her English is perfect, too. Jackie is the odd one out no matter how you look at it.

The fights are definitely the high points of the film, giving fans glimpses at what makes us love Jackie. They’re frustrating because I know Jackie was capable of so much better at the time, but they’re also fun in their own way. Jackie has a few great moments using chairs and a few everyday items, and the fights towards the end see him interweaving some acrobatics and quick, clever movements that are unlike any other martial arts performer before or since. Many of these moments are poorly shot, though, as Clouse’s camera is much too static to capture Jackie’s boisterous, energetic fighting. The fights are brute struggles of strength instead of the deftly choreographed dances of skill that Hong Kong films offer. Even still, the small Jackie moments we do get are what makes The Big Brawl worth watching.

I did enjoy watching The Big Brawl, but it’s more frustrating than it should be. Jackie and the supporting cast (including great performances by Mako and Jose Ferrer) do their best to work with what they have, but making Jackie into Bruce just doesn’t work. The script is pretty damn clichéd and tired, too, so it’s not like there’s a lot of wasted potential here that screams for better treatment. I’m glad we can look back at the film as a curiosity in the illustrious filmography of Jackie Chan. And honestly, his frustration with this film (and the rest of his ’80s Hollywood experiences), are perhaps in part responsible for his renewed energy upon returning to Hong Kong, leading to such greats as Project A and Police Story.

Next up in this chronological journey through the films of Jackie Chan is the zany car movie featuring Jackie Chan as a Japanese race car driver, Hal Needham’s The Cannonball Run! See ya then!