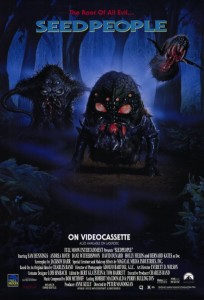 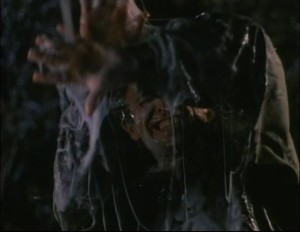 Seedpeople is campy to the max, and it’s very generous with its FX shots. Unlike many low-budget horror films, the monsters are not obscured till the end of the film. In fact, Full Moon must have known how hilariously awesome these seed-pod baddies were, because the space-faring rollie pollies are right there on the VHS box & poster! Low-budget films didn’t get rented without a cover that draws a browsing customer, and what better to sell your film than its incredible, midget-in-a-suit alien thing. I kid, but I genuinely love these creatures. They’re realized very well, and the filming actually makes them fairly believable in most instances. 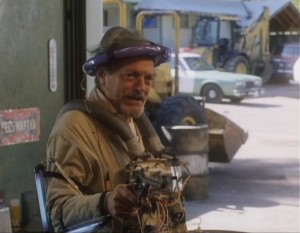 As with any low-budget monster movie, the dialogue scenes do little more than string the awesome monster scenes together. The acting from our leads Tom (Sam Hennings) and Heidi (Andrea Roth) is pretty good, though, and the supporting cast is filled out nicely with character actors like Bernard Kates and Sonny Carl Davis. But what’s different about Seedpeople is that it remains pretty engaging, even when the rollie pollie monsters aren’t on-screen. The film has a lot of early ’90s charm, and the script backs it up with outlandish characters and occurrences.

I was especially taken by the scene of the teenage girl trying to get evidence that their housekeeper was a seedperson. With the family’s huge VHS camcorder on her shoulder, she clumsily stands behind a tree trunk in the front yard, and later just behind a few spindly branches. The housekeeper, who is just standing on the porch looking out into the front yard, remarkably doesn’t see her. I guess if you’re trying to get definitive footage of aliens, stand behind a couple of tree branches to throw off their insectoid senses. The town crazy who wears fluorescent light bulbs around his head and down his arms is a hoot as well. And who could forget the sheriff’s office with a nice, welcoming bowl of apples on the front desk? I grew up watching The Andy Griffith Show, so I know how kind TV & movie sheriffs can be, but a bowl of fruit is a kind of hospitality that even I wouldn’t have guessed a sheriff was capable of. But y’know, you can never judge a book by its cover, and no matter how long you live you can always be surprised by the actions of another, sheriff or otherwise.

Seedpeople was a total blast, and it easily ranks as one of my favorite Full Moon films. It’s not one for everybody, but for those attuned to its B-Movie quirks, you’ll be rolling in the aisles. Wait a minute… rolling? Oh no! They’ve gotten you, too! Run! Run!

Next time on Full Moon Tuesday, I’ll be checking out a very early Charles Band film, the softcore musical Fairy Tales! See ya then!