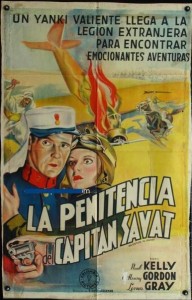 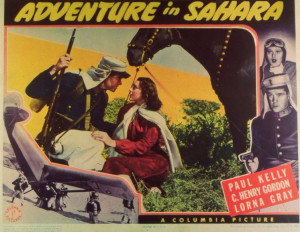 As I’m watching this for its Sam Fuller connection, I find it intriguing to consider how different the military aspects of the film feel against Fuller’s later entries into the war genre. As a pre-WWII film, this was before Fuller had received firsthand knowledge of the battlefield and his youth shows here. The Foreign Legion of Adventure in Sahara feels pretty much like the Foreign Legion in many other 1930s films, and the interactions of the military men don’t feel especially truthful or realistic. Everything feels very “Hollywood,” if you’ll allow me a description as vague and esoteric as that. The story is from the point of view of the enlisted foot soldiers, though, so there is definitely a spiritual connection with his later work if nothing else. And it’s also worthwhile to note that Fuller is only credited here with the story, even though Fuller wrote the initial draft.

However, what really sinks the film from being better is related to the story. The final act — while very exciting, action-packed and entertaining — doesn’t make a whole lot of sense. Not in terms of “What is going on here?” but instead, “Why on Earth would he do THAT?” Being a movie, it’s the “THAT” which makes for a lot of fun, adventuresome cinema, so I understand why the story is what it is, but it just seems like our main character could have made a different choice. I get the feeling I’m just nitpicking, though, so I’ll stop. But first let me also say that the lone female character in the film is completely needless and tacked on. I enjoyed her presence; she was just given absolutely no purpose in the film.

But as I’ve often said of less-than-perfect movies, none of that actually matters. The film entertains throughout, and while somewhat preposterous I cannot deny that it was quite the juicy and interesting tale. For fans of ’30s film and westerns, Adventure in Sahara is a fun, inconsequential film to pass a quick 56 minutes.