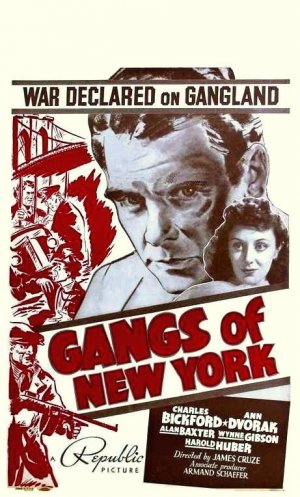 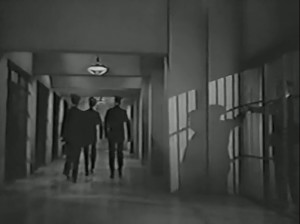 From here the story does take an interesting turn, though, as the injured man gives the cops a piece of information that makes them take notice. He claims that the murders were carried out by members of Rocky Thorpe’s gang, a powerful organization the police had thought dispersed when they threw Rocky Thorpe himself into the slammer five years back. So what’s the FBI to do when they’re at a loss to figure out what’s going on? Get creative! Turns out they employ a guy that looks exactly like Rocky Thorpe and they decide to pull the old switcheroo: releasing the fake Thorpe on parole so that he can infiltrate Thorpe’s gang to gather information on their current activity. Oh, and where do they keep the real Rocky Thorpe? In a hidden cell behind a secret panel in the warden’s office, of course!

I’m sure any reasonably astute film fan could piece together the rest of the story from here. The film plays out very predictably (which isn’t the most heinous crime), but the film is also incredibly boring. There’s little to no emotion running through the interactions between the characters, it’s just Rocky and Fake Rocky barking orders to people in growling, gravely tones. At first I loved his voice… who doesn’t love a good gravely voice? But as it went on and it became almost the only sound in the film (I’m exaggerating slightly) it became too much to bear. I could deal with it if there was more to the movie. We’re just supposed to jump into hating the bad guys and liking the good guys, but I felt like we should have known more about both sides. The story arc of the movie felt flat and lifeless. OK, so the gang is still active and the FBI is gonna take it down, but surely there was a more cinematic way of bringing that about. Argh, I’m so frustrated with you, Movie of 75 years ago! 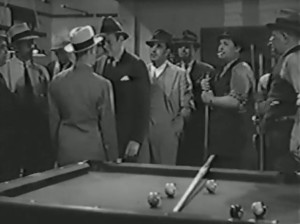 The movie is also notable for the source material that inspired it. It is where the film gets its name, and yes, it’s the same book that also inspired Martin Scorsese’s 2002 film Gangs of New York. The two films share virtually no similarities (other than gangs and New York), but if you wanted to, you could imagine Scorsese’s Gangs of New York as a spiritual prequel to this film set in the 1930s. It doesn’t surprise me that Fuller found inspiration in a non-fiction book detailing the criminal underworld of New York through the years, as stories like this must have reminded him of his days as a homicide reporter. These kinds of lurid, vivid stories filled his entire filmography, so even if this one is something of a dud, it was also his first credited attempt at a full-length script so we have to cut him some slack. We must remember that if Fuller is defined by the typewriter, the rifle and the movie camera, at this point Fuller was only truly acquainted with one of these foundational pillars and as such isn’t the same Sam Fuller that directed his way into my heart.

Gangs of New York isn’t all bad, though. That opening is definitely a worthwhile use of time for any Sam Fuller fan, and the film also boasts a pretty fun car chase with period cars. There’s also a moment towards the end where a truck drives through a brick wall and right into the middle of an ongoing hand-to-hand brawl, which amused me quite a bit. Unfortunately, there’s little else to entertain here and I wish I could say more flattering things about a movie that opens as good as this one does. The premise isn’t bad, it’s just executed poorly.

No trailer to be found, but the movie is public domain and available through Archive.org (and above)!