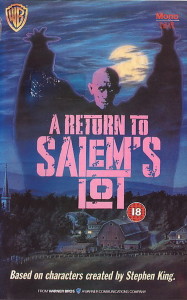 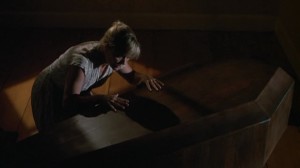 Joe Weber (Michael Moriarty) is an anthropologist on assignment across the world, documenting the violent religious practices of a jungle tribe. He’s doing some of the most important work of his life, but when he receives the call that his son is going off the deep end and needs his absentee father’s guidance, he begrudgingly gets on a plane to help out however he can. After picking up his punk kid, Joseph, they drive to an old house that Joe has recently inherited. The house is in… wait for it… Jerusalem’s Lot! Apparently, they changed the name back to its original full title after the name Salem’s Lot gained an evil connotation. But just changing the town’s name does not change those who live in the cursed township.

This is a great classic horror setup, but A Return to Salem’s Lot does not play out in such a manner. In a way, it’s similar to The Wicker Man, where our “normal” characters are thrust into a small town situation and forced into figuring out what’s going on around them. But in A Return to Salem’s Lot we know what’s going on immediately (because we’re an informed public) and the characters know pretty quickly as well. So what’s a mysterious horror film without the mystery? A horror comedy, that’s what! The comedy here isn’t nearly as pronounced as it is in Cohen’s The Stuff, but it’s there and it’s good. It is subtle enough for people to just think the movie is a poor attempt at horror, but it all seemed intentional and purposeful so I’m siding with “subtle horror comedy.” 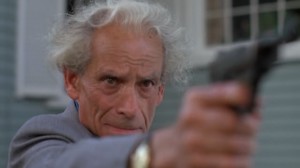 And then there’s Sam Fuller. Even more so than Larry Cohen’s involvement, I was most interested in seeing Sam Fuller play a featured role as a Nazi hunter. You might think that a 75-year-old man shouldn’t be traipsing around hunting fugitive war criminals, but Fuller is a feisty, spry 75 in A Return to Salem’s Lot. The film is fun and interesting before he shows up, but his presence elevates the film to new heights. My love of Sam Fuller may be clouding my judgement a bit, but I think his charisma and raw energy would satisfy even someone who had no idea who he was. He brings his cigar-chomping persona on-screen perfectly, and watching him stake vampires through the heart with Michael Moriarty was an absolute blast. The story itself may not resemble Stephen King’s Salem’s Lot, but as the previous adaptation was largely missing the “going around town during the daytime and staking vampires” scenes, A Return to Salem’s Lot does realize some small bit of the novel in its own way. 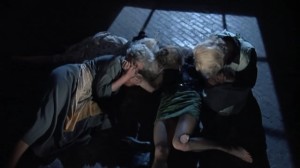 A Return to Salem’s Lot is also rated R, so it gets to throw out all kinds of colorful cursing and fun gore. This also gets it a little closer to representing some of the novel’s flavor, but the extreme moments in the film (both in cursing and gore) have little of that unique King feel. That’s OK, as the film is able to put together a fair selection of hilarious, curse-filled lines and fun gore moments all its own. The budget is clearly limited, so many of the gore shots are quick and dirty, but these flashes of nasty go a long way.

A Return to Salem’s Lot isn’t that great when taken as a sequel to Salem’s Lot, but on its own it’s a fun vampire B-movie that offers a different take on the genre. But it does feel like a movie that is only going to resonate with a select group of people, so if you’re unsure I’d say you’re probably better off selecting something else. But fans of Larry Cohen, Michael Moriarty, Sam Fuller and B-Movies should find a lot to enjoy.