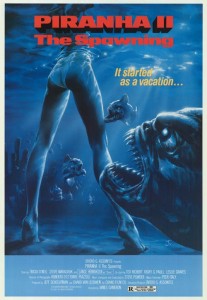 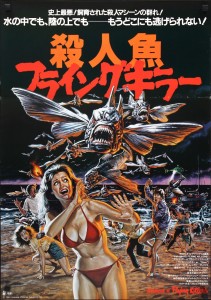 Like many Cameron films, Piranha Part Two: The Spawning features large sections of underwater footage. The film centers around a sunken Navy ship off the coast of a Caribbean island, and this made me think a lot about Cameron’s fascination with the ocean. I’m sure it started at some natural place like a childhood vacation or a book he read, but I’d love to believe that his obsession began while filming the scenes for Piranha Part Two: The Spawning, and that all further references to the ocean in his films are his way of nostalgically looking back on his most derided of films. I’m pretty sure this isn’t the case, but you never know, right?

Anyway… the story. What’s here is rather thin to say the least. The story is definitely not the reason to watch Piranha Part Two: The Spawning. At the heart of the tale is a small family, a couple with a teenage son. The parents, Anne and Steve (played by Tricia O’Neil and Lance Henriksen), are recently separated, but unable to truly get away from one another. Steve is the town policeman and Anne is a diving instructor, so when bodies start turning up around her dive sites, Steve is forced to confront Anne with hard questions. Their teenage son Chris is also involved via a sub-plot of a job running a sailboat for a rich man with a hot teenage daughter, but it doesn’t rate high enough to bother mentioning. Although, I just mentioned it, so take from that what you will. Anyway, there are piranhas in the ocean! Imagine that! But these piranhas have evolved! They can fly!

And these flying piranhas are the reason to watch the movie. If you like shitty, low-budget, B-Movie special FX, then these fish should definitely fly their way up your Netflix queue. At a few points early on it looks like they literally just threw a plastic fish prop at the actors’ faces, and anytime a movie is so bold as to throw a fake fish at people’s heads, I’m in 100% of the way. I was enjoying the film up until the flying fish were introduced, but let me tell you, their introduction is the stuff of legend. I laughed so hard that my throat was sore from it. It’s fantastic. Remind me about this one if I ever make a “Top 10 Villain Reveals in Horror Movies” and I forget to include Piranha Part Two: The Spawning. 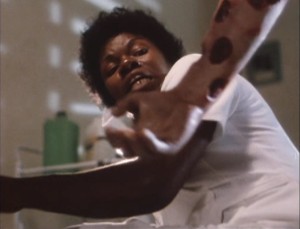 The only real problem is that these fish moments are actually rather sparse. The actual film isn’t a straight horror comedy or even a satirical horror comedy like the original. Piranha Part Two: The Spawning isn’t funny in the traditional sense at all. The laughs come almost completely from the hilarious flying fish. So some people will laugh, while others will merely groan and reach for the stop button. The forced seriousness of many of the dramatic scenes do make for a rather slow-moving film, and coupled with the general lack of mayhem, Piranha Part Two: The Spawning is something of a slog to get through at times.

But… so what? Sure, it’s a bit slow, and it’s more than a bit daffy, but all in all I had a good time watching this not-so-good-but-still-entertaining sequel to a great movie. It contains about 0.5% of the James Cameron you know and love, and the mere existence of The Terminator makes it clear that Piranha Part Two: The Spawning doesn’t represent the artistry and the craft that Cameron had to offer.

In addition to the flying fish, the film also gives us quite a few hilarious (perhaps unintentionally so) quotes, such as:

“Turn your radio on, you jackass!”
“As usual, Raoul, you’re full of shit!”
and my favorite: “You go to asshole school or something?”

B-Movie fans willing to sit through some slowness to reach the sweet nectar that is hilarious flying fish should definitely check this one out.