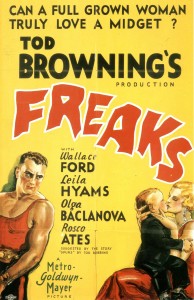 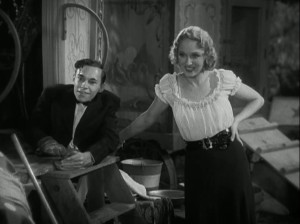 There’s a part of me that applauds this move, as it is easily what set this film apart from others. It is the reason we’re still talking about Freaks. But at the same time, the casting also makes me feel like it might be somewhat exploitative, a stunt like those used by carnival barkers to entice people inside the tent to see the bearded lady or the snake woman. The story definitely does not play up these exploitative elements, though, instead painting the malformed players as people just like you or me.

So I guess that must be the takeaway from Tod Browning’s Freaks, that the film is something of a human rights piece on how everyone should be given equal respect. The film acknowledges that the performers are different, strange and unique, but it always does so in a humanizing way. While the entire film is set at the circus, we only catch a short glimpse of a performance, and even that is of one of the few “normal” people who are also working in the troupe. 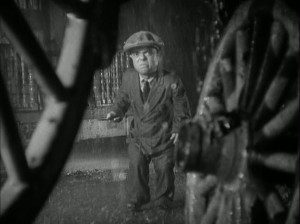 Most of the film is composed of slice-of-life scenes detailing the day-to-day lives of the many performers. The camera and the story move through the camp like a fly on the wall, witnessing hushed conversations, unrequited love and passionate quarrels. And while these scenes sometimes stray off the story’s path and become somewhat meandering, they help to illustrate the film’s ultimate message that we’re all the same, no matter what form we may have popped out of the womb in.

Tod Browning’s Freaks is not something that I would clamor to see again, but it’s a film that definitely stands the test of time. While it survives almost purely on its inspired casting of real-life circus performers, its message is true and resonant even today. And besides that, the final 10 minutes or so are visual perfection and achieve an incredible amount of high-quality, horrific tension. Classic film fans and lovers of strange, fringe cinema should definitely seek this one out.

Freaks was a part of the 2013 Blind Spot Series where I see one movie a month that I feel I should’ve seen a long time ago. It’s all the brainchild of Ryan McNeil over at The Matinee, one of the web’s premiere film blogs. Head over there tomorrow where he’ll have a post of his own for the series, as well as links to all the other people taking part in the series.