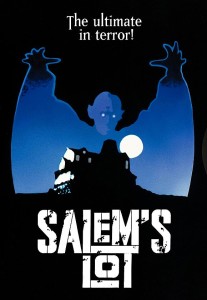 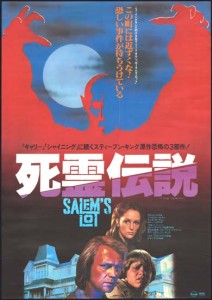 Our introduction to the town in the novel is through a myriad of characters going about their daily business. It starts in the early morning and we slowly work our way through the entire day. These stories, while somewhat episodic and disjointed, are also very much interdependent on each other and help to build the town’s narrative. We can almost feel the town breathing along with its residents. The film does try to emulate this section of the novel, and it does an admirable job given the budget and the limitations of a TV miniseries at the time. But due to the characters excised, combined, and truncated, it feels like we’re given snapshots of a few residents instead of being let in on the lives of a broad section of the town. I suppose this is something of a traditional book vs. movie gripe, but in a book defined by its detailed depiction of a small town, it’s hard not to be at least somewhat frustrated with what’s given to us here.

And, as is to be expected, just about every lick of nasty violence and mayhem is completely removed, toned down or edited out. For instance, there’s a lot of fade outs to commercials right as something dastardly is about to happen. Makes sense, and I don’t begrudge them for doing it, but it’s kinda hard to successfully adapt a Stephen King novel without the things that make it haunting and unforgettable. The most egregious offense is not showing the “Ben Mears as child” flashback at all. This scene is one of my favorites in the universe of fiction, Stephen King or otherwise. It affected me so much as a teenager when I first read the book that to this day I continue to think back on the images it conjured up. So perhaps it’s a good thing they didn’t ruin those imaginations! 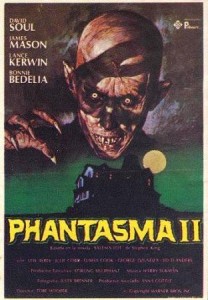 But the thing about Salem’s Lot is that despite my issues with some of the changes or omissions, it still manages to be a rather faithful and successful adaptation. While it doesn’t have the gruesome qualities that the book has, it definitely carries a lot of atmosphere and raw tension. As long as you’re able to roll with a slower, metered film pace, it’s incredibly watchable. The main story beats are essentially the same as the novel, so if nothing else the film flows well. The key thing to remember is that if you’ve never read the novel, you’ll never know that anything was altered. The adaptation was done with skill, and nothing ever seems incomplete or lacking.

Unfortunately, the main vampire does come off rather cheesy at times, though. At other times he’s quite effective, but it’s more the former than the latter. This hurts the film perhaps more than anything. Here Barlow is a mindless shadow of his character in the book, where he is more akin to Bram Stoker’s clever, cultured Dracula than the speechless, hideous vampire of Nosferatu. This places most of the villainous duties on the shoulders of Straker, and while James Mason is more than capable, he’s not quite effective enough to forgive the weak treatment that Barlow receives here.

I watched the original 3-hour miniseries version, and I do recommend this take on Salem’s Lot. It gets a lot right, and even though it does some dumb things along the way, its atmosphere is nice and it definitely captures a good bit of the original story’s spirit. And surprisingly it doesn’t feel like three hours! So if you enjoy ’70s horror, this is a good one to hunt down.