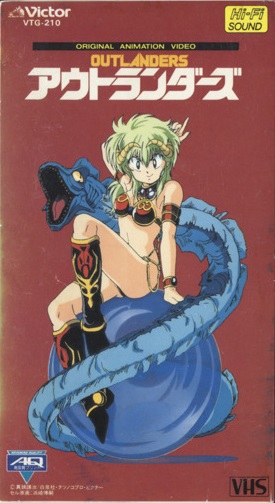 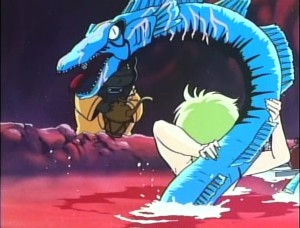 It’s obvious the plot isn’t even trying. For one thing, Kahm’s new boy toy Tetsuya doesn’t have any qualms about marrying the woman he just watched mercilessly slaughter an entire platoon of soldiers. It doesn’t get any better from there. I would ordinarily try to avoid spoilers, but there isn’t anything in this film to spoil. I mean that literally. Even the main characters don’t know how the enemy spaceships explode at the end. There is no explanation for it; it just happens.

But this is a comedy, so the plot isn’t the reason we’re here. Some good jokes would overshadow the plot issues entirely. Too bad they aren’t here. I don’t mean that the jokes are bad. I mean that there aren’t any. Instead it’s filled with sexual innuendo and fan service. Of course it’s all done in the cheesiest way possible, like when Kahm gets in a sword fight wearing nothing but a bath towel. The irony being that the towel covers more of her body than her usual armor bikini. And of course it also has the requisite moment where Tetsuya trips and fall face first into Kahm’s crotch. It’s all tired and bland. I laughed on occasion, but mainly out of disbelief that they were willing to use such obvious and generic material. The only moment of genuine humor is when a serpent monster swims around in Kahm’s bath, and she promptly grabs it and scrubs her back with it. Sorry, I’m afraid I’ve gone and spoiled the only moment worth watching in this movie. 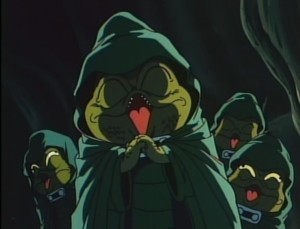 Comedy is the weirdest and wildest anime genre out there, but despite its attempts at being absurd and filled with crazy shit, Outlanders turns out to be very, very dull. It’s the blandest comedy anime I’ve seen. (Actually, I take that back; one time I made the mistake of trying to watch Azumanga Daioh.) It’s as if Outlanders thinks that a humorous tone is all you need to make people laugh. If it weren’t for all the nudity, I’d say it was made for 12-year-old boys. The film expects that just mentioning sex will cause the audience to fly into a fit of giggles. In case you missed it, the film even provides a laugh track of sorts from a gaggle of midget lizard/fish looking aliens that bustle into the room any time Kahm gets a little too close to her new fiancé. They do nothing but titter away at the very idea of Kahm having sex. If your response to that statement was, “Heh, heh. You said ‘sex,'” then maybe this is the film for you.

There’s a hefty load of action here, too. It’s nothing memorable by any stretch, but at least it’s better than the humor. There are also a couple of creepy, villainous old men with robotic eyes, but that’s not exactly compelling or original. Oh, and you can’t forget the wolf-man space-samurai dude who gets it on with a sword-wielding cat-eared girl for the sole purpose of more fan service. Actually, you can forget about them. They aren’t that memorable either. The only good thing I can say about the film is that with its less-than-an-hour runtime it doesn’t overstay its welcome. But really you should avoid its welcome all together.  There are a lot funnier anime titles out there.