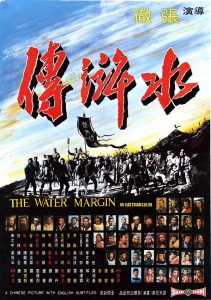 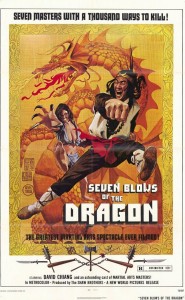 This kind of martial arts epic was unheard of at the time, the closest thing I can think of is Chang Cheh’s The Heroic Ones, a film about the 13 sons of a barbarian king, but The Water Margin is The Heroic Ones turned up to 108. Everything about this movie is bigger and better than anything the Shaw studio had previously attempted, and it’s easily one of the best — if not the best — film I’ve seen so far in my chronological series. Now is probably also a good time to bring up a bit from Chang Cheh’s memoir, where he states that on these series of movies that he “co-directed,” he actually made the first film himself, such as The Water Margin, and then subsequent films in the series were made by the other directors (Pao Hseuh-Li for The Delightful Forest and Wu Ma for All Men are Brothers). I haven’t seen either of those yet so I can’t comment, but it makes sense from a monetary standpoint to have Chang Cheh’s name on as many films as you can, especially when there are a couple of newcomer directors helming the follow-ups. At the end of the day, it’s all about getting butts in seats, and Chang Cheh’s name was a pretty surefire way to do that in 1970s Hong Kong. And while I’m mentioning the other films in this little Shaw Brothers Water Margin series, there’s also the 1972 Cheng Kang film, Pursuit. According to Chang’s memoir all four films were shot simultaneously, but he offers no insight into why they all released in 1972 except All Men Are Brothers, which didn’t come out until 1975.

One of the first things to strike me about the film (besides the massive cast) was how anachronistic the music score is. The film is a historical epic, so it’s reasonable to assume that traditional Chinese music would accompany the movie and set the tone for the story. But Chang Cheh chooses to have a totally ’70s organ-led rock fanfare open his film. The modern music continues as the Liang Shan outlaws are introduced, with a jazzy little guitar/organ jam that plays in-between character introductions and bits of dialogue as they feast and drink wine. It’s incredible. I’ve held the belief that Quentin Tarantino’s usage of anachronistic music in his films stemmed (at least in part) from his love of the Shaw Brothers and their re-purposing of music from James Bond and spaghetti westerns, and seeing The Water Margin makes that theory an almost forgone conclusion. I lament that Tarantino is so ingrained in the dialogue at this point that I’m unable to watch the film without thinking about him, but I can’t, and I am positive that this film was a huge influence on his work.

Getting back to that massive cast, I find it quite interesting that with so many Shaw Brothers players on-screen, two of the central characters (and two of the most badass dudes in the movie) are played by a couple of Japanese newcomers to the Hong Kong industry, Tetsuro Tamba & Toshio Kurosawa. Neither were newcomers to the business, with Tamba previously acting in the James Bond film You Only Live Twice, as well as the Masashi Kobayashi classics Harakiri and Kwaidan. Tamba had a long, successful career and was a rare actor to find success in multiple regions; his acting here is top-notch stuff, so I’m not surprised. He later went on to play Ricky’s master in the training flashback in Story of Ricky. The other actor, Toshio Kurosawa, is most notably known for his starring role in Lady Snowblood, and continues to act to this day. Together they imbue The Water Margin with more of a believability because we haven’t seen these guys act in 30 previous historical martial arts films from the Shaw Brothers, in a similar way to the casting of Chen Kuan-Tai in The Boxer from Shantung.

And like The Boxer from Shantung, The Water Margin features the same foursome of action choreographers (Lau Kar-Leung, Tang Chia, Lau Kar-Wing and Chan Chuen) and they do an excellent job here. They give David Chiang’s character — whose backstory involves him being quite adept at wrestling — many flips and throws, showcasing a wholly different fighting style than is traditionally seen in these films. Chang Cheh chooses to film many of the moments when Chiang first unleashes these techniques in slow-motion, giving the audience a chance to fully drink in just how different they are from what audiences were used to at the time. At one point, the parrying flips and rolls of Chiang made me think of Donnie Yen’s use of MMA-style techniques in Flash Point, so in that way The Water Margin feels like an ancient root of that very different and modern film.

There actually aren’t many extended martial arts sequences throughout The Water Margin, though. Everything is more of a quick burst to keep the story flowing. Chang Cheh also keeps the focus on the story and the characters, which helps distinguish The Water Margin from the sea of Shaw Brothers martial arts films that are more about the goal than the journey. The question of how badass these guys are never comes up, though, as Chang makes damn sure you know exactly how awesome each one of them is. The entire movie is sort of one huge build up, constantly constructing these characters and slowly bringing them all together for a final showdown. The tension is always thick, with the stakes constantly on the rise.

So if you want to see virtually ALL of your early Shaw Brothers favorites in one movie, The Water Margin will treat you right. I say virtually because there are a few notable exceptions; the ones I noticed off-hand were Tien Feng, Lo Lieh and Bolo Yeung. Beyond the cast of Shaw favorites, most of the characters also have excellent wuxia names, even though this isn’t a wuxia film. Stuff like Sung Jiang the Timely Rain, Zhu Tong the Beautiful Beard, The Magic Messenger, The Black Whirlwind, etc. Any way I look at it, The Water Margin is 100% pure, unfiltered, incredibly iconic cinema from Chang Cheh. I loved it… if that wasn’t already apparent. 🙂 1972 is definitely shaping up to be the best Shaw year yet.

Some studio known for their excellent DVD/Blu-ray releases — coughCriterioncough — should totally pick this one up and give it a release worthy of its power and place within the Shaw catalog. Just because it’s an action film doesn’t make it any less of a treasure of world cinema.

Next up in this chronological jaunt through the Shaw Brothers Martial Arts catalog: I’ll be taking another side trip into Golden Harvest’s output as I look at Lo Wei’s Fist of Fury starring Bruce Lee! See ya next week!