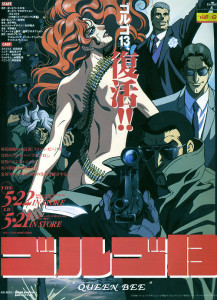 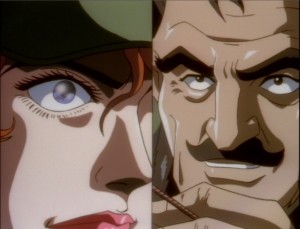 The film isn’t exactly the same, though. Dezaki’s direction has mellowed a bit compared to The Professional. Oh, it still has its fair share of split-screen face shots and melodramatic triple takes of still frame images, but it doesn’t quite reach the the extreme level of the first film. This in some ways helps the film stay grounded and more effective, but it also means losing some of the humorous absurdity. Golgo still makes love with all the enthusiasm of a statue while the girl squirms and squeals in delight, but somehow the hilarious contrast is lacking this time around.

Gone, too, is that astonishing ’80s CG that gave me so much joy in the original. This, however, is unquestionably a good thing. Bad ’80s CG is hilarious. Bad ’90s CG is just bad. Aside from that, the film’s visuals look very similar to the earlier film as well. The picture quality is crisper and the character designs bear a slightly more ’90s feel, but despite it all, if you put the two side by side, they wouldn’t look out of place together. This sadly also extends to the animation. This level of quality was perfectly acceptable for an early ’80s film, but by 1998 I expect more fluid movement in my anime. 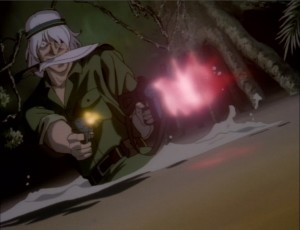 The plot carries the same basics as well, but it does seem a bit better than the first film. Mostly this has to do with Golgo’s target, the Queen Bee herself. She has a much more sympathetic story than you would expect, and it twines into a larger conspiracy for a presidential election. Despite all that, she is still clearly batshit insane, and her confused personality helps keep the film interesting.

It does suffer from a limited runtime though. It’s only an hour long, and that leaves it feeling a bit rushed. The more engaging plot is betrayed by its time restrictions. The strong emotional moments therefore come off as overdone melodrama rather than serious character development. 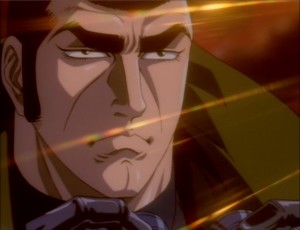 This also cuts out a lot of cool action potential. The first film gave us a good car chase and some fun James Bond gadgetry. They aren’t as essential here as they are to Bond, but it was still some fun adventure that I was sad to find absent. The jungle warfare scenes go a long way towards making up for that, though. They are pure awesome, especially the military code words. We’re used to such phrase as, “The eagle has landed,” or some other meaningless code message, but you’re rarely treated to more creative fare like, “The tomato has fucked the cabbage,” which graces Golgo’s jungle adventure.

The end result of all this is a film that’s slightly better from a technical perspective, but not quite as entertaining. It is, however, an ideal sequel, one that stays true to the original while still having its own identity. So if you want some violence, badassery, and lots of sex, Golgo 13: Queen Bee is every bit as good a choice as before. Likewise, if you want compelling characters and a meaningful story, it’s every bit as a bad a choice as before.