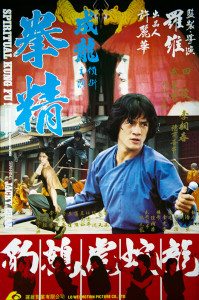 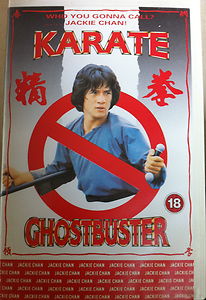 And what sets Spiritual Kung Fu back even more is that after half of the movie focuses on this comedy, it largely disappears for the second half of the film. That might sound like a good thing, as it might make way for awesome kung fu battles, but that sadly isn’t the case. The heretofore sub-plot involving the stolen Shaolin Seven Deadly Fists manual and its lost-for-centuries counterpart, the Essence of the Five Fists manual, takes control of the film and we never look back. But even this traditionally plotted kung fu stuff is kind of boring, and largely slave to Lo Wei’s desires to do things like they used to be done. So when Jackie learns the Essence of the Five Fists style from the ghosts inside the manual, we only see a couple of brief sparring matches between him and the ghosts and then suddenly he’s a master. It’s very similar to how the old school Shaw Brothers films handled training. This reinforces my desire to see everything in chronological order, as while something like this might fly in the early days of Jackie Chan’s career, it’s almost depressing to watch after Drunken Master. I got a good handle on the frustration that must have gone through Jackie’s mind while making these films for Lo Wei.

But no matter what, I did enjoy the kung fu ghosts, perhaps more than I should have. They arrive on a comet that lands in the Shaolin library, and they immediately start causing trouble (and eventually farting in that monk’s face). They wear long red wigs and white leotard bodysuits with tutus and white face paint. And just about every time they’re on-screen, they are accompanied by a bubbling synth bass groove that I enjoyed quite a bit. It’s a stretch to call it music, but it evokes something of an otherworldly style and feeling. The ghosts are a comical bunch, for sure, but sadly I liked them more in theory than in practice. They never get a real chance to shine. I’m sure Lo was glad to finally have a hit film with Jackie, but I have to wonder if he actually thought this was a good kung fu comedy after seeing what Jackie had achieved with Yuen Woo-Ping. I imagine not, given what happened when Jackie returned to make the final film of his contract with Lo Wei… but that’s a story for another review.

Another major failing point is that there’s a sad lack of fights in this film, especially in the first half. The first legitimate fight with Jackie isn’t until 46 minutes in, once again featuring his fun snake-style fighting seen in many previous films. It’s not a great fight by any means, but in this movie it’s fun and much appreciated after so long without much in the way of martial arts — spiritual or otherwise. There are more fights as the film moves towards the conclusion, with two big ones between Jackie and James Tin Jun coming almost back-to-back. While the choreography is technically sound and the movements are well-performed, after the Seasonal films it’s just hard to get excited by what’s on offer here. If we try to forget those films and remember that this was made prior to them, they’re more pleasing. The fights aren’t on par with some of the stuff seen in Snake and Crane Arts of Shaolin, but they are near the top end of the Lo Wei-produced Jackie Chan films. That being said, they’re also kind of boring and without much innovation. Jackie does a few good acrobatic moves, but the fights are merely fights, unlike later Jackie fights where it feels like there’s an entire story being told through the choreography. The tale of the battle, so to speak. In any case, Jackie’s battle to leave Shaolin (AKA the Eighteen Monks’ Test) is a good one, and easily the most memorable thing about this movie besides the ghost farts.

Even through my disappointment and the malaise that set in while watching Spiritual Kung Fu, I did still enjoy it. It’s not one I’d reach for again any time soon, but it’s got a few moments sprinkled throughout that are unique enough to be memorable. I like the idea of ghosts in kung fu movies, bringing something supernatural to the genre, but Spiritual Kung Fu definitely does not have the ghosts putting their best ectoplasm forward.

Next up in this chronological journey through the films of Jackie Chan is Jackie’s first crack at directing, the 1979 film The Fearless Hyena!