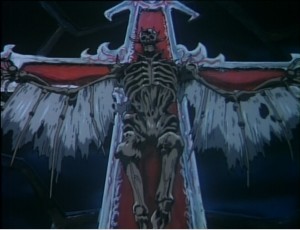 The film as a whole is pretty average, all things considered. While it never does much of anything noteworthy, it never really falls on its face either. Even though I never felt invested enough to keep going, I never felt bored. It’s full of action, and keeps up a good enough pace. It’s also got a really great transformation scene where John sprouts arms out of his back and grows awesome monster armor. The animation is great for this scene, although as a whole it can be hit or miss. This is certainly nothing abnormal for the time, and is really to be expected, but there were a couple of moments that felt weaker than they should have.

I think my favorite bits were the weird demon worshipers and their crazy plans. I kind of wish we’d gotten more detail on those guys, but I should be careful what I wish for. The plot here doesn’t bring anything enlightening to the table. Asking for more detail would probably be begging for a boring waste of time that would only lessen the coolness of those freaky rituals. I’ll just be happy with what I got.

There’s enough fun stuff crammed in here to make it an enjoyable way to pass the time, and at a mere 45 minutes it won’t overstay its welcome. Just make sure you’re here for the right reasons. Wanting anything other than some cool action scenes would be the wrong reasons. I wouldn’t go out of my way for this one, but if you’re in the mood to see stuff blow up, then this one’s got you covered.