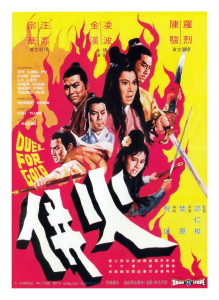 Framing the story in this manner creates a great intrigue when watching Duel for Gold, as does any film that opens where it closes. I think it’s human nature to enjoy circular structures, things that can neatly come together. When Duel for Gold‘s story begins with a pair of sister acrobats coming to town, it is hard to imagine how it will lead to the ending we’ve just seen glimpses of. But it does come together. And it’s in that coming together where Duel for Gold shines. I’m not going to spoil anything, just know that if you like a good tale of intrigue and double crosses, Duel for Gold will be a very nice night’s entertainment.

As I mentioned above, the main thing holding it back from being truly spectacular is the fight choreography seen throughout most of the film. During the first hour, it’s mostly large group battles, which always have a tendency to get muddled and boring, and the fights here are no different. The choreography itself isn’t horrible, but it’s just not anything that will stand out or leave any real impression. The last half hour, though, is a completely different story. The fights become personal and are between just a few combatants. The choreography steps up to the challenges that the script demands, so the film is able to end incredibly strongly. I should say that even though the fights aren’t always stunning, the sheer amount of awesome wuxia feats seen here is impressive. And they look fantastic. Whether Lo Lieh is catching a tea set on his sword and then pouring some for himself only by flipping his sword around, or Ivy Ling Po and Wang Ping are balancing each other on the tips of their swords, the film is chock full of great martial feats and they all look fantastic.

Duel for Gold is expertly shot, too, looking just about as beautiful as any Shaw Brothers film I’ve seen. I especially loved the intro that I described earlier, and how it informed the rest of the film. Where the intro is out-of-focus fighters with sharp foreground objects taking center stage, the rest of the film is filled with shots of the exact opposite. As the fights play out before us, many incidental objects pass directly in front of the camera out-of-focus. Sometimes Chor Yuen places his camera so that it is looking through these objects, like a busted door or the legs of a table, giving certain moments of the fights a feeling like we’re an innocent bystander unfortunately caught in the middle of a clash of skill. Which reminds me, there are more things getting smashed in this movie than probably any previous Shaw film. Anything from windows, doors, tables, chairs, basically anything wooden, is just there to have someone land on it or crash through it. And who doesn’t love people busting through wooden things?

I’ve been eagerly awaiting the entrance of Chor Yuen to my Shaw Brothers review series for a while now. Not only is he one of the great directors of classic wuxia films, I have a more personal reason for looking forward to his films. The seed to start this series lies in a review from early in this website’s history for Chor’s film The Magic Blade. I found the film entertaining, but I was bothered by a number of things and the review comes off a lot more critical than I think it needed to be. As time went on, the film continued to come up in my mind, and I started to feel like my evaluation of it was off a bit, simply because I wasn’t properly equipped to review the film. I hadn’t seen enough wuxia films, especially Shaw wuxia films, so what did I know about The Magic Blade? And so a few months later, I set out to change that. I reviewed Temple of the Red Lotus in December 2010, and now 2½ years later I’m a whole mess of films deep into the Shaw catalog. So now that I’ve caught up enough to encounter Chor Yuen in the series proper, I’m glad he didn’t disappoint.

I read on the HKMDB that there was an unfinished version of this script shot by Lo Wei and starring Chang Yi, so I assume that was what Lo Wei was doing at the time he decided to leave Shaw Brothers. So did Shaw Brothers purposefully pursue Chor Yuen to fill Lo Wei’s shoes as the studio’s highly experienced, wuxia-focused director? It would be easy to assume this given the data we have, but it’s really nothing more than speculation on my part. In any case, it’s an interesting possibility.

Duel for Gold is an action-packed tale of wuxia intrigue, expertly put together by director Chor Yuen and screenwriter Ni Kuang. It’s not quite perfect, but it’s damn close and any fan of wuxia could definitely do a lot worse. Oh, and let’s not forget the great wuxia nicknames: Invisible Loner & the Thousand Hands Goddess.

Next up in this chronological jaunt through the Shaw Brothers Martial Arts catalog: Pao Hsueh Li’s The Oath of Death! Sounds like a good one, and Pao later went on to become a directing partner of Chang Cheh, so I can’t wait! See ya next week!