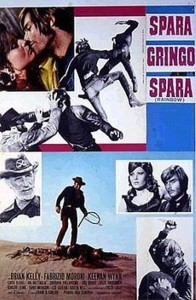 This begins a series of “I’ve got you! … Oh shit… Now you’ve got me!” exchanges that can go either way depending on your mood. I chose to find most of them rather fun and likened them to the quick shifts of power in a wuxia film. You might not be so tolerant, and even I tired after the 9,854th shift of power, but I’ll take quick twists and interesting scenes over pure boredom any day.

What keeps Shoot, Gringo… Shoot! from venturing into those boring lands, are its fun, interesting characters (particularly the two leads). Our hero Stark might be a little too… stark for my tastes, but Brian Kelly (of Flipper fame) absolutely looks the part. Fabrizio Moroni plays Fidel, the errant son, and he lends the film a slight homosexual charm that even I couldn’t ignore. There’s also Keenan Wynn in a small, but memorable supporting role as the leader of the outlaw group.

Another reason the film remains entertaining is its varied scenery, taking us from dusty western towns and Mexican adobe buildings to dry, sandy deserts and gorgeous, mountainous country. This isn’t an amazing looking film by any means, but oftentimes it comes very close, and I imagine with a bit more budget they really could have made this one unique. A good remastering would also help out, as the print is rather faded and tired looking (although still of better quality than a lot of these old Italian westerns that aren’t Leone or Sergio Corbucci films).

I don’t have much else to say. If you already like spaghetti westerns beyond the giant, well-known touchstones, then I’d definitely recommend Shoot, Gringo… Shoot! as one to check out. On the other hand, if you’re more of the “I’ve only seen the Dollars trilogy” sort of fan, then I’d go with a different film first. Perhaps something by the other Corbucci.