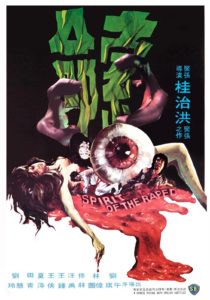 I don’t know that I’d classify this as a black magic film, but it’s definitely a cousin to those works. Many of the signature elements are here, such as the moral retribution, the putrid gore in a rainbow of colors, and the kind of rabid intensity that only the best filmmakers can maintain. But when it comes down to it, no one in Spirit of the Raped is actually practicing any black magic. Not that it really matters. Instead we have the downtrodden heroine transcending her mortal body with a graveside wish and seemingly by the force of her will. That, and a Taoist priestess with good intentions who attempts to help Liu by praying over her shroud for her soul. As she says, “When the door to hell is opened, there’s no turning back.”

In addition to many of the beloved black magic hallmarks, that incredible Kuei Chih-Hung style is here in spades. I instantly fell in love with it when I saw Bewitched back in 2010, and Spirit of the Raped is the earliest film I’ve seen from Kuei to exhibits so much of his well-crafted technique (although I have suspicions that his 1974 film Ghost Eyes might contain just as much). The extreme wide-angle lenses, exaggerating and distorting the image in wild ways for the most impact, abound in Spirit of the Raped. Kuei’s love for guerilla-style location shooting and mobile camera is also heavily on display, making for a film that’s always on the move and visually exciting. In my mind, Kuei’s style is like a faster-paced proto version of Wong Kar-Wai’s iconic style. Kuei stopped making films as the Hong Kong New Wave began to take hold of the industry, but I can’t help but think that his experimental and unique films were of influence to the many directors that would come to define the new style of Hong Kong filmmaking.

The protagonist of Spirit of the Raped suffers violent and shocking rape on a number of levels (physically, financially, emotionally, etc.), but when the tables turn Kuei Chih-Hung makes sure the villains get every last bit (and then some) of what they deserve for their deeds. At only 76 minutes, Spirit of the Raped is incredibly potent, and in the film Kuei lays the gnarly moral groundwork that would underpin his crowning achievements in the horror genre. For fans of the underrated director, Spirit of the Raped is a must see. Unfortunately, it’s hard to get ahold of, so I really hope that Celestial gets around to putting it out digitally (or on Blu-ray) sometime soon.

Next up from the Shaw Horror library is the 1980 horror anthology featuring shorts from directors Chor Yuen & T. F. Mou Tun-Fei, Haunted Tales! See ya then!