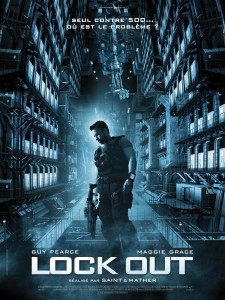 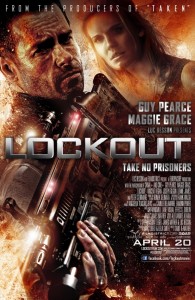 While the initial touchstone for the film is Escape from New York and the Snake Plissken character, as the film unfolds and the inherent comedy comes with it, it becomes clear that the film is closer to Escape from L.A., except in reverse. Escape from L.A. was a parody of Escape from New York, but with the Snake character remaining just as hard-nosed and serious. Lockout is set in a serious world, but the lead Snow character is all parody. He’s kind of like a version of Big Trouble in Little China‘s all-talk Jack Burton that found his way into a space prison. Clearly, Luc Besson must be a Carpenter fan.

Anyway, Carpenter homage aside, a lot of this movie makes no fucking sense. Like none. The president’s daughter is visiting the maximum security space prison to interview the inmates? OK, whatever, but then when the interview goes awry, why isn’t anyone around to contain the situation? What happened to the warden and all his dudes? I must have missed the 394th line of expositional dialogue that stated they were all going out for a quick bagel and lox at the Space Cafe. And this is only one of many situations like this in Lockout. One of the best comes when they mistakenly stumble into a radiation zone where the warning signs state that suits must be worn in this “highly hazardous area,” but then nothing happens to anyone and it never really mattered anyway because they magically are no longer in the radiation zone roughly 30 seconds later. 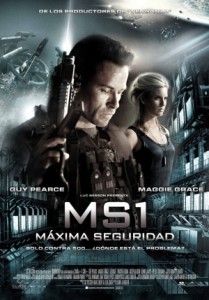 So at this point you might be wondering why Lockout receives 2 1/2 stars and not something a lot lower. Well, it’s a little hard to explain really because there’s so much crushingly bad filmmaking at hand here, but I just have to boil it down to one word: fun. Regardless of every issue, Lockout really is stupid fun. It’s not great stupid fun, but it’s stupid fun nonetheless, and that always counts for something. That, and it’s like nearly all action. The setup period is much too long (30 minutes), especially if you’re already familiar with the Escape from New York premise that it’s setting up, but just about everything after that is stupidly fun action.

Now getting back to the character of Snow, it takes a certain type of actor to be able to pull that type of dude off. Not everyone can be gruff and funny, but Kurt Russell, I mean Guy Pearce does it excellently. He saves what would otherwise be a pretty average space action movie, and adds that extra charm that will make people remember it. Kind of like this other movie I saw where this guy flew a glider into an island prison and had to rescue the President… Anyway, where was I?

So we’ve established that Lockout is dumb fun featuring a fairly memorable main character, and that it isn’t ashamed to be any of these things. This little combination reminds me of one thing (and it’s not a Carpenter film :)): the cinema of the ’80s. While Lockout is much too modern to be considered an ’80s throwback, it’s a definite stylistic throwback in terms of the way it handles itself. The laws of physics… who needs ’em? Complex relationships… they’re for the birds! Villains that aren’t wild caricatures… find yer own movie! Lockout treats everything it touches like it has ’80s logic, and while this isn’t nearly as successful as it would be in a real ’80s movie, I admire them for trying.

Lockout is not a good movie, but if you want to switch off, relax and watch big, dumb space explosions then Lockout will suit you fine. The entire framing story, which comprises a good chunk of the opening and closing sections of the film, is completely nonsensical, but surprisingly it didn’t really matter. It’s there because you can’t release a 60-minute movie in today’s film climate, but like the “robbing a bank” intro to Escape from New York that got cut out, there’s no real need for it here either. Which is kind of ironic, as the strange narrative jumps in Lockout make it feel like the first cut of the film was somewhere closer to three hours before they got the memo to deliver a 90-minute movie. Weird feelings aside, if you want dumb fun, Lockout will deliver.