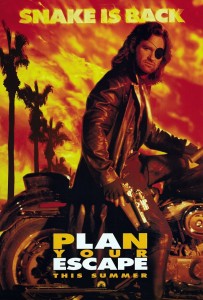 An earthquake measuring 9.6 on the Richter scale hits at 12:59 p.m., August 23, in the year 2000. After the devastation, the Constitution is amended and the newly elected president accepts a lifetime term of office. The country’s capital is relocated from Washington, D.C., to the President’s hometown of Lynchburg, Virginia. Los Angeles Island is declared no longer part of the United States and becomes the deportation point for all people found undesirable or unfit to live in the new, moral America. The United States Police Force, like an army, is encamped along the shoreline, making any escape from L.A. impossible. From the southeastern hills of Orange County to the northwestern shore of Malibu, the great wall excludes L.A. from the mainland. The President’s first act as permanent Commander-in-Chief is Directive 17. Once an American loses his or her citizenship, they are deported to this island of the damned, and they never come back.

Phew. This long-winded intro can be used as an example as to why Escape from L.A. is ultimately a failed project. It basically sets up the same situation that the intro from Escape from New York does, but it does so with excess instead of the no-nonsense approach of Snake. I do love that intro, though, I’m just using it to illustrate my point that Escape from L.A. is a much bigger and bloated film than its predecessor. But where I used the intro, you could also substitute nearly any scene in this film and the argument could work just as well.

Which brings me to the main thing that you must keep in mind while watching the film: Unlike Escape from New York, this film is not to be taken seriously. There are lots of moments that do play serious, but there are many more that are simply playing off a similar situation from the earlier film to different and sometimes comedic results. For instance, when captured in New York, Snake must fight to the death in gladiatorial combat with The Duke’s hulking champion. In L.A., Cuervo Jones asks him to play some full-court, high-stakes, solo hoops. The basketball scene is ridiculous if you try to take it seriously, but as a satire of the original (and as a purely comedic scene) it works perfectly. Escape from L.A. could easily be called a remake because it’s so dependent on the original film’s structure and plotting, but it always plays things slightly differently so even big fans of the original won’t get too bored by the similar proceedings.

And there’s also another explanation for the change of tone: the setting. I’ve never been to New York but my experience of it through movies is that it’s a dark, sprawling mass of skyscrapers and people. It’s fast-paced and scary to an outsider like myself, and while I’m sure it’s also a funny city (it did produce Woody Allen and many lighthearted Broadway productions), it feels like a very serious place. L.A., on the other hand, is the city where I grew up and lived around for the first 30 years of my life. It’s still a big, scary city but the feel is completely different. People in L.A. are more superficial, fun-loving and prone to attention deficit disorder, so the films reflect this identity of the city they represent. Would Peter Fonda’s character, waiting to surf the tsunami wave, exist in New York? Or Bruce Campbell’s plastic surgeon to the inmates? Of course not, but in L.A. they make perfect sense (and make for a couple of memorable B-Movie moments).

But even with my enjoyment and understanding of the film’s components, there are some things that still rub me the wrong way. By far the most damning is that Escape from L.A. is far too episodic without the same sense of drive towards a goal that the original had. The Duke’s motives and plans were easily understood, but I lost track of what Cuervo Jones was going for nearly as soon as I found out. Whatever… now Snake’s hang-gliding into Disneyland and machine-gunning the bad guys! Death from above! And guess who’s hang-gliding in with him? Pam Grier, Steve Buscemi and Al Leong, motherfuckers! But don’t get too excited because Pam Grier is where the film also takes one of its biggest missteps. Pam Grier is badass — always has been, always will be — but the choice here to distort her voice is just unforgivable. I can look past most things, but robbing Pam of her voice is something I just cannot condone.

Regardless of tone and flaws, Carpenter achieved something special when he was able to replicate nearly every aspect of the previous film. Between the opening shots of the cold, concrete police station, the green wire-frame graphics of the computers, and Snake’s large-scale countdown watch, Escape from L.A. feels exactly like the world of Escape from New York, 16 years on. The ending is especially great, again playing off the original’s ending, but taking it even further than before. It reminds us that Snake is one of film’s greatest anti-heroes, and the strength of this ending makes me forget many of the questionable decisions throughout the film.

You may or may not agree with me, but I really enjoy the fun-loving take on Snake Plissken seen in Escape from L.A despite whatever flaws it has. Snake’s still the same old dude, except I always thought he was a little taller.