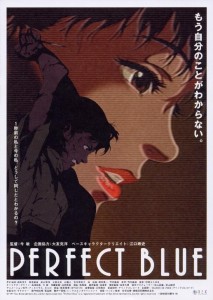 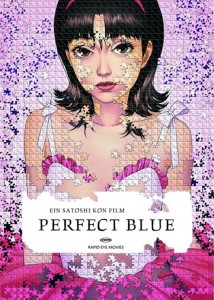 Mima decides to leave her singing career, which she enjoys but doesn’t seem to be very lucrative, and turns to the field of acting, landing a role in a TV show that mirrors the plot of the movie. She’s not as comfortable with her new job, though, and her few fans are pretty upset about it as well. She also discovers a web site devoted to her, and the knowledge it has of her daily actions is disturbingly accurate. And as Mima’s acting roles become more sexually explicit, the crew involved in Mima’s new career start turning up dead.

If all there was to worry about was some stalker going on a killing spree, I might have gotten tired of it. But where the movie really hits its stride is when Mima begins hallucinating. She keeps seeing an image of herself that berates her for switching jobs when she loved singing so much. The image dances around her while remaining tantalizingly out of reach, bounding around and through objects while Mima chases after.

As the film goes on, her hallucinations worsen, and the film does a magnificent job of conveying the impending fear and paranoia that engulfs Mima, especially with the scene shifts. It constantly twists your expectations when starting a new scene. My favorite being when one character is attacked, and the scene immediately cuts to a car trunk slamming closed, but not the car of the assailant which you might expect. It’s a completely different group of people who have nothing to do with the assault. 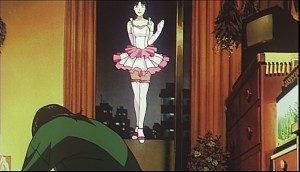 These jagged scene shifts gradually build up a disconnect with reality, so that by the end of the film you, as well as Mima, have no idea what is real. This could have easily turned into a confusing mess, and it will probably feel that way to many people. For me however, this kind of reality twisting is exactly what I’m looking for, and it has just enough explanation to feel like it knows what it’s doing, while still leaving a lot of things mysterious. It makes you think, if you want to understand what’s going on.

It would be too easy to just shrug off the film’s confusion as hallucinations that never actually happen. There’s a logic at work here, and the first time I saw the film I took it too realistically. I wanted the movie to make sense in a realistic way, but it has as much fantasy as anything. Now that I can see that, I found the film makes a good deal more sense this time around. That doesn’t mean that I’m certain of my conclusions, or that someone couldn’t come to a different answer and have good evidence to back up their arguments.

This is definitely a film for people who like to think about their movies and dissect them for answers. That type of story can annoy me if I feel that there are no answers to be found, but I felt that Perfect Blue does have answers buried inside its twisting maze of a story. Anyone who wants everything explained by the end is probably going to be more annoyed than entertained, but if you like a good thought-provoking story, then Perfect Blue is a riveting experience and well worth tracking down.