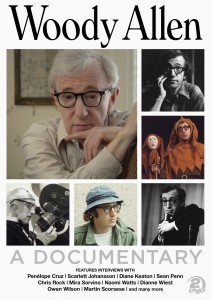 Directed by Robert B. Weide

Woody Allen has been one of my favorite filmmakers since the early days of my film obsession. My first Allen film was Annie Hall, and the first time I saw it I hated it. I was a punk teenager that went into the movie with a chip on his shoulder. I found it wholly unfunny, but in the following months I also found that I couldn’t stop thinking about it. This eventually led me to re-watch the film a couple of months later, and an admiration of Allen’s style and wit has been growing ever since. He’s definitely not a filmmaker for everyone, but for anyone who’s a little neurotic and has contemplated the nature of life and death a few times, it really doesn’t get any better than the thought-provoking comedy of Woody Allen.

Allen is the perfect amalgamation of his two greatest influences: the Marx Brothers and Ingmar Bergman. I was never able to get into Bergman when I was younger, but I have a feeling my adult penchant for deep thought and analysis will reveal many intricacies in his work that were completely lost on me in my youth. Anyway, this documentary is a superb piece of work detailing the path Allen took to becoming a director, as well as examining the perennial themes in his work. I never noticed how many of his films are about choosing between fantasy and reality, but the film does a great job of making that fact readily apparent. Yes, I’d rather have come to it myself via a long, drawn-out review series, but once in a while it’s nice to get something quick and easy.

My main question with the film is whether those not harboring a love of Allen’s work will find anything of worth here. Surely anyone interested in filmmaking will enjoy seeing and hearing Allen talk about his process, and having his 40-year career laid out in front of you in three hours is a quick and easy way to become familiar with his catalog. But then there’s all the masturbatory “Woody is a genius” interviews that get tiresome, even for someone like me that holds Allen in very high regard. My girlfriend — who’s not a fan — watched most of it with me and said, “I still don’t get it” when it was all over. So I guess that’s my answer.

It’s too loving and biased to be a critical examination of Allen’s filmography, and it never concerns itself with delving too deep into Allen’s psyche. I don’t feel like I know him any better (which is fine), and the film didn’t make me love him any more. What it did do was remind me of all those precious Woody Allen movies I haven’t seen in years, and just how much fun I’m going to have when I eventually review my way through his filmography.