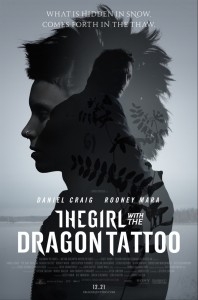 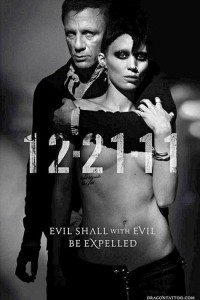 By far the most interesting comparison of the two films are the way they use nudity. Part of me wonders if its usage in this version was expressly dictated by the rules of the censors, but instead it may just be American culture and our unwillingness to have much (or any) male nudity in our films. There’s plentiful female nudity throughout the film, but outside of a little Daniel Craig plumber’s crack, there’s not a bit of male nudity. You’d think a film that contains a revenge rape on a male wouldn’t be so sexist, but yet here I am watching yet another scene of Rooney Mara taking her shirt off. The lesbian scene in the original is also expanded to include some girl-on-girl titillation, and even the rape of Lizbeth feels sexualized.

Netflix has the Swedish version on Instant, so I was able to re-watch a few scenes to refresh my memory. Sure enough, the rapes in the original are much more affecting and hard to watch, brought home by incredibly realistic performances. The American version features far more female nudity during the rape, and the scene’s focus is completely shifted from Lisbeth’s perspective to that of her attacker. This creates an odd situation as we’re following his sadism instead of her pain. Perhaps this was done to create a feeling of unease on the audience’s part — hopefully no one is deriving pleasure from it — but it’s a strange choice and one that distances us from Lisbeth emotionally. The American film may be more graphic with its nudity, but the Swedish version is far more graphic in every other way, and is therefore much harder to watch (and more genuine).

At the end of the day, Fincher’s version is more watchable and easily digested, but it still suffers from a lot of the same muddled storytelling. Perhaps the original tale is just so complex and twisting that the two films are the best it can be adapted into one feature-length film. It should also be noted that while Rooney Mara does a great job in her role as Lisbeth Salander, she pales in comparison to Noomi Rapace’s turn in the Swedish version. This is offset by Daniel Craig’s superior performance as Blomkvist in the American version. The two films are slight variations on the same theme, and I am at a loss to recommend either of them. The Fincher version is overall the more entertaining film, but I’d rather see the Swedish version again if I was forced to watch one of them, and it will be that version that I remember.