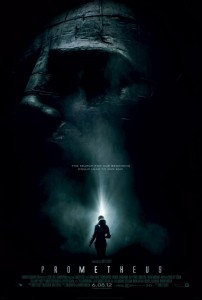 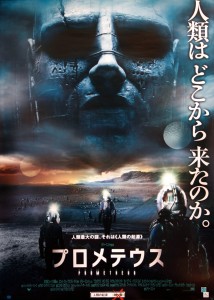 But—and this is a big but—if you are able to divorce yourself from the idea of this as an Alien prequel and just take it as is, it’s a stunning science fiction work. Seriously, if there was never an Alien franchise this film would have been much more well-received, regardless of the misleading, action-focused trailers. There’s one scene in particular that I groaned and yelled at, but all the while I was thoroughly entertained and enjoying the scene that killed one of my favorite bits of Alien‘s mystery. Why? Because I never treated the film as anything other than a parallel sidestory to Alien, and the differing aesthetic between the two films helps this line of thought greatly.

Prometheus is densely packed with impressive sci-fi visuals and concepts, and they are the focus and the draw. Visually, I doubt there will be a more impressive sci-fi movie for years. It’s nuts how good it all looks. I’m a sucker for gorgeous sets and futuristic, usable design and Prometheus brings the two together non-stop for two hours. The ship’s interiors feel reminiscent just enough of Alien‘s Nostromo and the film’s color palette is a literal key to my heart, combining blues and yellows and grays in such heavenly ways that I was in near rapture throughout the film. If this shit doesn’t win some Oscars, someone’s rigging it.

With all this focus on the visuals and the sci-fi concepts, the characters are shallow. I won’t even try to argue that they aren’t. But these people are merely there to take us through the journey of discovery; we aren’t specifically meant to connect to them like you would in a normal movie. That being said, the characters are as dumb as a bag of rocks, or sticks, or bricks… pick your favorite inanimate object. They’re dumb. Like so incredibly dumb that you’d think you were watching an ’80s sorority house slasher. As their idiocy directly results in horrible things happening that move the plot along, you wouldn’t be wrong to yell things at the screen like, “Oh yeah! That’s a good idea, dumbass!” or “This movie is so stupid!” But where others might see bad writing, I saw a good time. Where’s the fun in a sci-fi “shit goes wrong” movie where the characters are smart and nothing goes wrong? Maybe it’s my love of dumb horror movie characters, but I had no problem with this aspect of the film, in fact, it made me love it more. I was shocked at how brazenly dumb they were, but it never once bothered me. 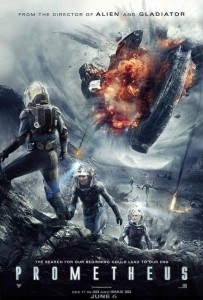 This brings me to David. Played by Michael Fassbender, David is this film’s android, and he’s one of the most intriguing characters in the entire film. Leave it to the robot to be the compelling character. Certain story elements seem to point towards this being done by design, but I’ll have to see it again to really be sure. Hopefully the sequel will delve a little deeper into that aspect, but I won’t hold my breath. Anyway, there’s only one thing that didn’t make sense about David: his ability to do certain things around the alien world. I don’t want to spoil anything, but this could easily be a big point of contention for naysayers. I enjoyed it in spite of it not making a lot of sense, as it hints at a much broader backstory for the expedition than what we’re given. And besides, if the Alien franchise taught us anything, it’s that the Weyland-Yutani corporation are quite the resourceful bastards.

Despite issues that could be glaring depending on your expectations, I loved Prometheus unconditionally. Even in its silliest moments, I was too overwhelmed by all the pretty pictures and inventive sci-fi concepts to care. Prometheus is a true science fiction film from an industry known for only making horrible “action sci-fi” films. If I wanted to, I could be uptight about what this film does to the mystery and mythology of Alien, but Prometheus is a feast, and I can do nothing but gorge myself on its offerings. And for not being a horror movie, there’s one sequence towards the end of the second act that is fucking gnarly, and one of the most foot-stompin’-est scenes I’ve seen in a long time. This is some serious body horror, and because it’s not in a horror movie I don’t think I was fully prepared for it. It hit me like a ton of bricks, and I can’t imagine anyone watching it and not squirming around like a frightened four-year-old kid.

If you dig sci-fi that asks broad, existential questions, then you must see Prometheus. I’m torn by what it does to the mythology of Alien, but it’s such an otherwise magnificent film that I love it regardless. Big Alien fans will get a lot more out of this than a noob, although I’d argue that it’s better to just watch it without any sort of Alien-style expectations. It’s a completely different type of film, and a fantastic entry into the “every film is a completely different type of film” Alien franchise. I look forward to Scott continuing the story in the recently announced sequel.

Prometheus is available to buy now from Tesco.