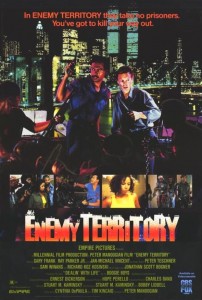 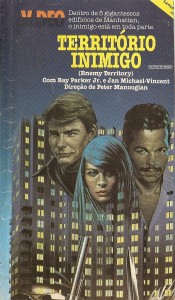 Enemy Territory is highly reminiscent of the work of John Carpenter, specifically Assault on Precinct 13. In a way, I suppose you could call it a reworking of that film, but it’s really its own thing. Anyway, I say reworking because where Assault on Precinct 13 has the good guys holding out from the gang’s assault in a police station, Enemy Territory has the good guys stuck in the gang’s building. Instead of starting in a position of power, the characters are always fucked, and must always be on their toes. This creates an incredible sense of urgency to every scene, which in turn keeps the pace of the film moving briskly. That fact that the Vampires are led by none other than Tony Todd in a delightfully fun, over-the-top performance, makes it all the more exciting. Todd creates an effective, menacing villain in his scenes against Barry and Willy, but his pep-talk scenes with the Vampires are unnerving in a Triumph of the Will kinda way. 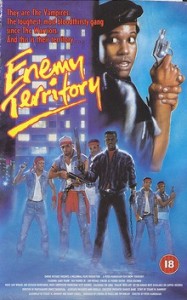 All those elements would usually be enough for a movie, and in a Hollywood film it would probably be all you’d get. But this is low-budget cinema, so at the middle of the movie when you think it has spent everything it has to offer, we learn of another character in the building who might be able to help. He is none other than ’70s heartthrob (and later star of Airwolf) Jan-Michael Vincent, playing a wheelchair-bound Vietnam vet obsessed with home security. He carries a machine gun with him at all times and has a spike launcher mounted to his chair. From what we see of him, he lives out his tortured existence in a dimly lit apartment made into a cold, workshop-like fortress, honing his skills for the eventual day when he will need them. His day comes when Barry and Willy walk through his door, and I don’t know about you, but I was more than happy to listen to him rant about how he only has a bird to warn him of poison gas, and how his mangy cat is only around to taste his food for him. A few simple words can’t do his wild character justice, he simply must be experienced to get the full effect. This is a role that Klaus Kinski could have destroyed, but to see Vincent do it is perhaps even more entertaining because it’s not something you expect from him.

The score also contains a thick John Carpenter atmosphere when it’s being subtle, and a more overt ’80s action feel when it’s not. I’m a huge fan of ’80s scores so I enjoyed it completely, but others would probably call it dated. The end credits rap song (by The Boogie Boys, as was the intro song) also features very direct melody lifts of Carpenter’s score for Halloween, further cluing you in on his influence if it wasn’t already apparent. As if all this wasn’t enough to sell the movie to you, it was also shot by a young Ernest Dickerson, and features some fantastic cinematography and Steadicam work.

Enemy Territory is a great find in a sea of low-budget ’80s action. It’s not a traditional action film, and it dips into near-horror at times of gory violence, but it’s a non-stop movie filled with thrills. It’s also kinda like the Ice T/Ice Cube movie Trespass but with a lower budget and no hidden treasure, or The Raid but in reverse and without any of the incredibly extreme violence or martial arts. It’s a good one, and I hope one day it gets a DVD release so more people can check it out.

Next week on Full Moon Tuesday, I’m not reviewing a Full Moon movie! Wha? That’s right, I’ll be checking out Bram Stoker’s The Mummy, a film that received a sequel in name only via David DeCoteau, one of Full Moon’s most well-known directors, so I figured I’d watch the original first! See ya then!