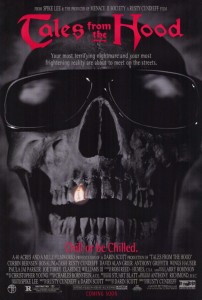 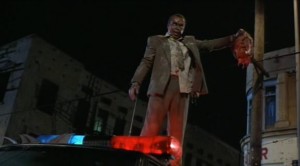 And speaking of those story finales, they’re mostly incredible. I think my favorite was the end of the second tale, but the first one is great as well. As I said before I thought the ending to the fourth story to be a bit lackluster, but after some reflection I like it more than I did initially. That’s the only ending that doesn’t immediately blast its meaning out in the open, instead playing it somewhat subtly and letting you fill in the blanks for exactly what was happening the whole time. So I can respect it for trying something different, and clever, but I don’t know, I was hoping for some good gore. Oh well. The framing story that we return throughout the film is rather boring as well, until the end when it closes out the film in such grand fashion that you can’t help but smile. I just wish that instead of these flashes of brilliance, the whole movie could have been like that.

Tales from the Hood is not a very good movie, but it does seem like a great one to have on in the background during a Halloween party. That way everyone could watch without being too engaged, everyone goes “OH SHIT!” at all the right parts, and the proper mood is set for the evening. It’s hard for me to completely write this off as a bad movie when the FX and payoffs are so good, and I do think their strengths are enough to warrant watching this if you’re a hardened horror vet or a big fan of anthology films. I’d imagine you’d have already seen this if you’re either of those, but if not, give it a shot. You might like it more than I did.