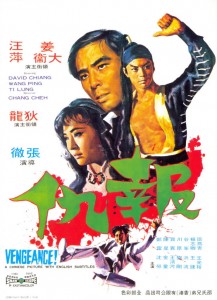 To the title, of course, as at this point we are introduced to David Chiang, our hero and vengeance seeker. He’s Ti Lung’s brother and he is not to be trifled with. Chiang doesn’t fuck around with silly things like words and mercy, he simply finds the bastards that killed his brother and proceeds to annihilate them. Chang Cheh’s films are always violently brutal, but the brutality seen in Vengeance! feels like it’s on another level. Where martial arts films up to this point had traditionally been one person (or a couple of people) facing off against a horde of villains, just a pair of henchmen in Vengeance! require everything our hero can muster. One fight that starts in the opera-house bathroom shows Chiang facing off against two henchmen, and Chiang relentlessly strikes them with all his fury injected into every blow. The scene ends with Chiang mercilessly kicking the final henchman in the face repeatedly, until his face is bloody, beaten and disfigured.

While violence and gore have always been a part of the Shaw Brothers films, Vengeance! takes the martial arts film completely out of the fantasy realm, and ushers in something more. This is easily as important a film to the genre as The One-Armed Swordsman because it takes the genre and completely reinvents it. In Chang Cheh’s memoir he states, “Vengeance! ushered in a new era of Early Republican action films, exerting a huge influence and paving the way for the kung fu star Bruce Lee.” In this genre, how much more influential can you get than that? Coming at it at random, it might be easy to see Vengeance! as just another awesome Chang Cheh movie, but in context of its release date, it is yet another revelation from a director full of them.

The action choreography here was handled by Tang Chia and Yuen Cheung-Yan, the same duo responsible for Have Sword, Will Travel, and their work together is gorgeous. Both are genre legends, and it’s easy to see why when you’re watching Chiang stab dudes with his giant knife in new and inventive ways in nearly every scene. Vengeance! also features the first really significant use of unarmed combat, which in and of itself is revolutionary. It’s been hinted at here and there in many of the previous Shaw films, but this is the first movie to focus solely on fights that do not contain the traditional swords of the wuxia genre. This shift comes along with the early Republic period, and really set the stage for the kung fu genre we know and love (which, much to my delight, is getting fairly close in this series).

Vengeance! is something of a loose remake of the John Boorman film Point Blank starring Lee Marvin, and from my memories of that film (I saw it once maybe seven or eight years ago), I think its visual aesthetics influence this film greatly. The stories are similar as well, but in that one there’s no brother and there’s some money that comes between Lee Marvin and his attackers. So instead of thinking of this as a straight remake, it should be considered alongside films like Yojimbo and A Fistful of Dollars: similar plots but different iconography and circumstances.

Chang Cheh’s camerawork is superb here, and his artistic flourishes greatly enhance the drama that unfolds within the violence. He cuts back to Ti Lung’s acted death on the opera stage, while he’s actually getting hatchets shoved into his stomach in his real death scene. Slow motion punctuates a couple of specific moments in the finale that amplify their impact, as well as allowing you to marvel at the wonderfully bright, red blood of the Shaw Brothers. Chang’s prior film Have Sword, Will Travel was filled with slow motion, but here the technique is reserved to only a couple of very specific moments. I liked its plentiful use in Have Sword, Will Travel but the careful selection of shots here helps make them all the more impactful.

Vengeance! led to many more films set within this early Republic of China era, and it’s easy to see why. There’s only so much you can do with the wuxia genre, and Chang Cheh’s constant displeasure and feelings of stagnation with the genre, and his searching for a new creative outlet led to pure gold. David Chiang is also phenomenal and carries the movie almost completely on his shoulders. Ku Feng performs admirably well as one of the main villains. And in addition to all of that, it’s also the first Shaw Brothers role for future star Chen Kuan-Tai. It’s just a bit part guarding a door, but it echoes the similar roles that Ti Lung and David Chiang had themselves in previous Chang Cheh films prior to their breakout successes.

Vengeance! is definitely one you don’t want to miss.

Oh shit! The original trailer! I get so excited when I find the actual trailer.

Next up in this chronological jaunt through the Shaw Brothers Martial Arts catalog is The Twelve Gold Medallions, Cheng Kang’s first film since the incredible Killers Five! Can’t wait!