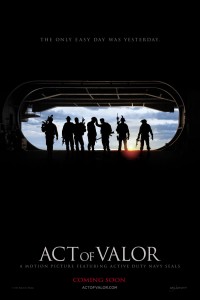 Our heroes are the actual men and women of the Navy, their identities never truly revealed, but by the way they hold themselves in the battles and the way they woodenly deliver the written lines, we know them to be the real deal. This element adds so much to the resulting film, lending every scene a realism that would be impossible with big name actors. Also not having to deal with acting egos allows the mostly visual storytelling to flourish and bring us one of the more exciting and riveting action films of the last few years. 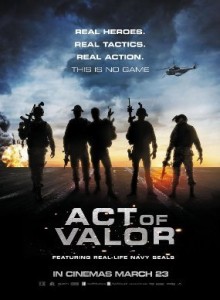 My main problem with the film is that the first action scene, a jungle rescue of a kidnapped CIA operative, is just too damn good. It’s so good in fact that it eclipses everything else in the film, and leaves you disappointed as it moves on and nothing comes close to the level of badass exhibited in that scene. The other two operations are good, and representative of completely different situations (similar to the levels in a video game), but they just can’t hold a candle to the initial action scene.

So why is this jungle scene so great? For starters, it features a mission so skillfully executed that it’s just fun to watch top men doing top men things. During the first phase, everything is quiet and stealthy, with each man performing perfectly in service of the goal. It sets up our Seal heroes as real men, carrying out a well laid-out plan instead of busting in guns blazing like Stallone and company. But don’t worry, when they are eventually noticed by the terrorists, the shit goes sour fast and our quick-thinking heroes escalate the situation in ways that Stallone can only dream about. This might sound odd, but there’s a real beauty to the way they can pull off a mission like this, not to mention it’s supremely badass. If nothing else, Act of Valor will make you appreciate the skill and training that goes into becoming one of the military’s elite forces.

The production budget was somewhere in the neighborhood of $15–20 million and directors Mike McCoy & Scott Waugh delivered one of the better American action movies I’ve seen recently. This reminds me of a thought I had while watching Aliens, also made for roughly $18 million. If movies of this quality, with none or limited CG FX, are possible with around $20 million dollars, then why in hell are we wasting hundreds of millions of dollars on shitty, overblown action movies that are neither thrilling or impressive? It boggles my mind, and I hope that this film’s success will help to start the low-budget action film train up once again. Through IMDB I see that Mike McCoy & Scott Waugh’s next work will be Unknown Soldier, apparently starring Arnold Schwarzenegger. Uhh… yeah! Now that’s what I’m talkin’ about!

Act of Valor is not a perfect action movie, but if you have any sort of love for military settings or old-school ’80s action, you should definitely check it out. Sure, it gets a little thick with pro-American propaganda at times, but it’s rather reverent of the men and women serving our country, and overall I think they did a great job of showcasing both the good and the bad of the job. I’m sure the Navy will be using this as a recruiting tool, but it’s definitely not a film made totally through rose-colored glasses. They show war as grim, brutal and life-changing. Death can happen in just a split-second, but these guys move forward regardless. You have to respect that.