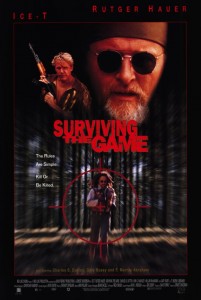 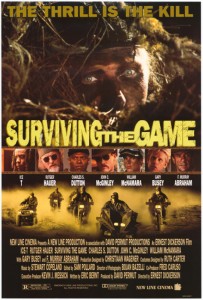 Don’t let anyone tell you otherwise, this film is perfectly cast. Ice T gives the best performance I’ve seen from him yet as a man with nothing to lose and everything to gain. Rutger Hauer is reserved, yet cocky and confident. Charles S. Dutton is just as good as he was in Alien 3, bringing a humanity to his role that other actors might have overlooked. His character is especially sadistic as by day he works at the mission helping homeless people, while on his off-time he hunts and murders the ones he deems fit enough to perform well. F. Murray Abraham and William McNamara are perfect as father and son, and while McNamara is definitely the weakest link, he provides some good moments throughout the film. John C. McGinley plays the group member looking not just for thrills and personal excitement, but also for a scapegoat to hang his rage on as he seeks some sort of silent revenge on the unfound killer of his daughter. He brings a deep-seated emotion to the character that informs his actions immensely. And I’ve saved the best for last, as this is literally the role Gary Busey was born to play. Every moment he’s on the screen is electric, and his monologue about his “birthmark” is one of the highlights of the film. You can knock Surviving the Game for having some questionably shitty dialogue at times, but Busey’s monologue is perfectly written. As the story grows in intensity, so does Busey’s delivery and director Ernest Dickerson wisely never cuts away, instead only pushing closer and closer to Busey’s wild-eyed face.

I’m somewhat new to Ernest Dickerson’s work as a director, having only seen two of his other films (Tales from the Crypt: Demon Knight and Bones), and those were both years ago. I’m more familiar with his incredible work as a cinematographer with Spike Lee, shooting many of his early films such as Do the Right Thing and Malcolm X. Dickerson’s work here is admirable, finding a perfect balance between wide-open vistas and intense action thrills. The editing in the action is notably poor early on, but as the film moves along it either got a lot better or my overall enjoyment of the film was too high to care. In a film that could have easily been phoned in and average, Dickerson directs with style, creating excellent, tense scenes one after another during the film’s main survival section. To be fair, Surviving the Game definitely has its ugly moments too, but for the most part it looks great. 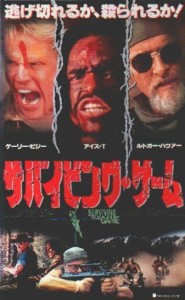 The same could be said of its music score. Composed by The Police’s drummer Stewart Copeland, and featuring the wonderful bassist Stanley Clarke, at times the score absolutely shines. At other times, it’s jarring, incongruous and tonally all wrong. It’s a shame as I can see a lot of people pegging this aspect as a deal-breaker as it shatters tension during some early scenes when the music is much too light. This shouldn’t stop you from enjoying the film; it’s only strange maybe 5-10% of the time. The rest of the score enhances and enriches the tension of the film greatly, whether it’s a haunting didgeridoo when Ice plans a trap, or pounding drums over an intense hand-to-hand struggle.

I can’t say enough about how well the villains are set up here. We know going into the situation that they’re not good guys (unless you really aren’t paying attention), so each interaction they have with Ice before they reveal their nature to him is laced with tension and unbearable fake smiles. This continues even after they send Ice into the wilderness to get a head start, as their ritual is to eat a leisurely breakfast while the hunted tries his best to get as far away as he can. The breakfast scene is one of my favorites as each man brings a different energy to the table. Hauer sports an eager and confident smile that resembles a man just easing into a relaxing vacation weekend, while Busey is full of manic, can’t-sit-still fury. This is all intercut with shots of Ice desperately running for his life, which only ratchets up the tension even more.

Surviving the Game reminds me in ways of a reverse version of Predator where we root for the lone man in the wilderness against the team of professional killers. There are also shades of Die Hard‘s lone hero taking out his enemies one by one by turning their tools and weapons against them. You could argue that the film’s not that great because the hunters never seem all that adept at their game (except Hauer), but I absolutely loved it. Even if they’ve done this many times, it’s ultimately still a game to them, as clearly no one has ever given them the kind of fight that Ice is bringin’. Their lack of experience in tactical situations, and their ability to be fooled is one of the film’s true strengths as it delivers many “Oh shit!” and “Fuck yeah!” moments to us on a silver platter.

Fuck the 21% Rotten Tomato Meter. Fuck the label “guilty pleasure.” Fuck the “true” meaning of the term pure cinema. Surviving the Game is pure cinema; an awesome, well-made survival action picture that delivers exactly what it promises. I loved it, and if you dig on ’90s action and survival films, you will too.