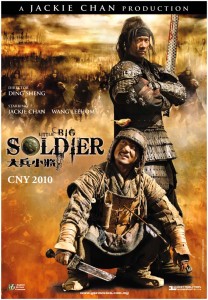 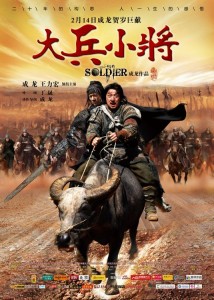 In terms of Jackie fans looking to recapture his glory days, you (or I) should just go back and watch one of the classics again. The action we get is pretty fun, with the best moment coming between Chan and Wang Lee-Hom who have a great fight over a sword in a small hut. The thing about Jackie’s character in this, like many of his modern roles, is that he’s a character that doesn’t really know how to fight. It’s established early that he’s something of a trickster, employing fake arrows, comedy and acting to get by on the battlefield. So to have him perform any real action, the filmmakers have employed the use of dream sequences to give the character the agility and prowess needed to go toe-to-toe with his enemies.

But you shouldn’t be coming to Little Big Soldier for the action; the action should be the cherry on top of the road adventure. And that’s exactly what it is. The interactions and the growing friendship between Jackie and Wang Lee-Hom hold the film together and give it heart and tension where it needs it. Thematically, it’s nothing new—in fact it’s a rather clichéd road movie—but despite this Little Big Soldier manages to keep the pace quick and rollicking enough to make it a fun ride.

I didn’t take many notes with this one, as it didn’t make me think about much while I was watching it. It was fun, I enjoyed it, and sometimes that’s enough. The film was shot entirely on location in the forests and deserts of China, so you’d better believe that it looks awesome throughout. The cinematography is nice and the film is filled with lots of beautiful shots. There are moments when modern filmmaking rears its head with digital slow-motion or dropped frames, but for the most part the film retains something of an old-school feel throughout.

If you like Jackie the actor, definitely check this one out. He does a great job, except for one crying scene towards the end that had me wondering if he was fake crying on purpose to get something from the other character and would break out of it, but he never did… so I guess we found one thing Jackie is unable to do. Wang Lee-Hom is also excellent as the captured general, blending fierce moments of action with quiet, tender conversations between himself and Jackie.

Little Big Soldier isn’t a classic, but in terms of modern Jackie Chan films, it’s excellent and easily one of the best in the last few years. Just know that he doesn’t do much in the way of fighting, and when he does it’s more creative evasion and rock throwing than anything else.