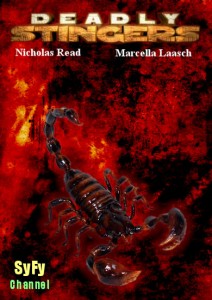 So with the film being a big collection of poorly scripted horror clichés, it does have the tendency to get boring at times. This isn’t good in a film that barely cracks seventy minutes, and therefore Deadly Stingers becomes more of a waiting game for the next gruesome kill than a truly entertaining movie. But where Deadly Stingers delivers is in its scorpion-fueled action scenes. I don’t know that “great” or “awesome” would be the proper words to use, but depending on your love of shitty B-movies, they could definitely fit the bill. For me, they were hilarious and exactly what I wanted from the movie, so I can’t ask for much more than that. There’s a surprising amount of gore in the film, as the scorpions sting first and ask questions later. And by “ask questions” I mean ooze out a mouthful of green acid venom all over their victims.

The filmmaking contained here starts off pretty awful, but as the film gets going it gets better. The standard, modern overuse of tight close-ups mars one of the opening scenes, and had me wondering if I was going to be able to make it through this one. The bane of my existence, the modern focus on close-ups. It’s one of the biggest deteriorations of modern cinematic technique, but who gives a shit about that? Let’s get back to the big fucking scorpions!

The gore is plentiful and well done. The FX are a mixture of CG, physical makeup FX and practical creature FX. The work is much better than you’d expect from a production such as this too. The CG scorpions look a lot better than other CG work I’ve seen on Syfy (which admittedly isn’t much), especially when they are seen in shadow from behind a curtain or something like that. It looks seamless, the light bending deftly around the folds of the fabric. Maybe that’s not a big feat, but I was impressed. The physical gore FX looked great and very bloody. The opening kill is probably the most graphic, but the others do get a bit meaty here and there. This is an old technique to give you a graphic image upfront so that your brain fills it in on future kills, but whatever, it’s effective.

One problem that did rain on the parade of scorpion violence was the fact that over the course of the film, the scorpions get more inept. This is supposed to be acceptable because now the humans know what they’re after, but when two people discover a scorpion behind them and it does nothing until they decide to attack… it’s pretty unbelievable. Later a scorpion lunges at our hero and is quickly fought off with a kitchen knife. This is equally offensive to the logic-hungry masses, but this particular moment is forgivable because it’s so damn entertaining. Y’see that scorpion that “lunges” at the hero is just a giant, fake scorpion dummy being hurled at the main character. After that, it’s all gravy, as they say.

Deadly Stingers is a shitty, but very watchable small town horror film. It doesn’t add a single thing to the genre, but it does remain much more entertaining than many other comparable productions. There are giant flaws in it (for instance, one female character is just non-existent for most of the movie… they must have run out of money to pay her for anything beyond a few poorly delivered, breathy lines.), but dammit I had a good time. This also has the distinction of being the most recent (and perhaps the final) film from low-budget filmmaker J.R. Bookwalter. This is the first film I’ve actually seen of his, but with a filmography containing titles like Robot Ninja, Zombie Cop and Humanoids from Atlantis, you can bet the farm that I’ll be checking out some more of his work at some point.

This is definitely one that deserves a real US release; it’s far better than many other films that have already received that. Maybe the Killer Scorpion Union can get together one of those online petitions. Those always work.