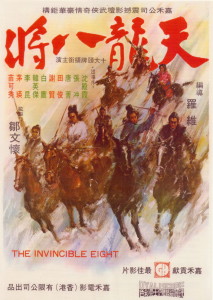 But that’s not to say that The Invincible Eight is not without merit, in fact, it’s actually a lot better than many of the Shaw Brothers wuxia films. The story is well-told and interesting, unfolding in unexpected ways and pulling you deeper into the narrative as the film progresses. They knew they needed a good film to kick off the studio so it’s no surprise that they adapted one of Ni Kuang’s novels to make the film. Before he became the highly influential martial arts screenwriter, Ni Kuang was a highly influential martial arts novelist, and his story plays very well on the screen (even with someone else adapting it). The story also kind of shoots the movie in the foot by having eight protagonists, but Lo Wei is a filmmaker good enough to balance their screen time and make each one stand out from the others.

And what are these eight protagonists doing, you ask? Well, they’re banding together to take out an evil general who killed all of their parents! It’s not just revenge, it’s revenge times eight! And that’s pretty much it! There’s more to it, of course, but that’s the part that really matters when you boil it down. Choreographer Han Ying-Chieh plays the evil general (to great results), and the heroes are played by a mix of seasoned players (Tang Ching, Lee Kwan, James Tin Jun, Lydia Shum, Paul Chang Chung, Patrick Tse Yin) and a couple of notable newcomers (Angela Mao, Nora Miao). The female players stand out the most, and are given the most interesting roles, with the exception of the general’s right hand man played by Pai Ying. He wields a whip, in addition to commanding a whip-wielding death squad of nine dudes (that also happens to include future stars Sammo Hung, Bruce Leung & Lam Ching-Ying).

And with these whip bearers comes the film’s only real innovation in its choreography: trying to deliver fights that don’t just rehash the standard sword vs. sword wuxia films. There had been many film prior to this that had varied weaponry, and even whips, but I can’t think of anything I’ve seen that featured as many whips as this! It’s a whip-travaganza! While a lot of the whip fighting is fun and interesting, there’s only so much whipping one can take. By the end, the novelty was long gone and I wished for a standard sword fight. And then they delivered a good’un for the finale! Thanks, Lo Wei and Co.!

I also had high expectations for the choreography because of Sammo Hung’s involvement, but a lot of the fights are merely mediocre. Nearly every fight in the first half is boring and unconvincing, without a shred of the playfulness or innovation evidenced on all the previous Shaw films Sammo had worked on. I thought my “Sammo as boy genius” theory was refuted, but then the whips came out in the second half and the choreography got much more interesting. As the film’s story got increasingly more exciting and enveloping, the fights also got progressively better. They never reach the heights of Brothers Five, but after the thrilling finale, I have to imagine a lot of that is due to the smaller budget here. Who’s to say, really, but I was glad to see glimmers of greatness throughout the second half.

Lo Wei’s direction is equally disappointing overall, as it rarely feels like a film made by one of the top Hong Kong directors at the time. It’s hard to put my finger on, but it just feels looser and less streamlined. Perhaps this is Lo Wei stretching out and utilizing that newfound freedom at Golden Harvest, or perhaps it’s him trying to make up for a lack of budget with a greater focus on dialogue scenes. Again, who’s to say, but even with these issues The Invincible Eight is entertaining and quick-paced, so it’s really only a minor problem.

I had hoped this would be a better film than it is, but it’s still pretty damn fun. It starts off a little slow, but it gets exciting when Angela Mao becomes more of a factor in the plot (which reminds me that I really need to see her “big” movies). It also has tons of wonderfully tense moments sprinkled throughout, which add considerably to its overall success. Perhaps the whip choreography was too ambitious, and they should have focused on more traditional sword-based action, but the whips added such a unique flavor that it arguably made it a much more memorable film even though the fights themselves aren’t as well done as I’d like.

A fun, exciting wuxia, The Invincible Eight is a great film for those willing to dig deep. It’s far from a genre great, but it kicked off Golden Harvest, so it’s notable and worthwhile just for that fact alone.

Next up in this chronological jaunt through the Shaw Brothers Martial Arts catalog I’m back to the actual Shaw Brothers with Chang Cheh’s The New One-Armed Swordsman! Fuck yeah!