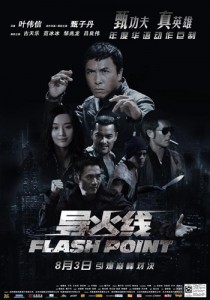 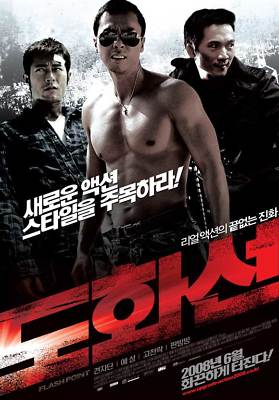 Where Flash Point is unique and worth talking about is the martial art choreography. Handled by star Donnie Yen, Flash Point takes a route I’ve yet to see in a Hong Kong film and it makes the fights unlike anything else. Yen put a focus on mixing MMA moves into the choreography, so in addition to the kicks and punches you’re expecting, there’s also a shitload of bone-crunching throws and takedown holds. If you’ve ever watched UFC and wished the fights were more exciting, then the final battle of Flash Point is exactly what you’ve been craving. It’s a long, hard-fought, kick-fucking-ass battle that will forever be populating lists of awesome Hong Kong fights. If only the rest of the film featured more of this incredibly unique and interesting choreography, we could have a true legend of a film on our hands.

Instead Donnie Yen goes through most of the film doing his best to look badass, cool and sexy all at once, and honestly, succeeding handily at all three. I don’t think there’s a single scene in the film where he isn’t either: A. Wearing a Leather Jacket, B. Wearing Mirrored Aviator Shades, C. Sitting on his Haunches Staring off into Space, or D. All of the Above. There’s also a scene on the beach where he’s shirtless (and ripped as fuck!), but he does retain the shades and the haunch-sitting. Donnie Yen has literally never looked cooler. 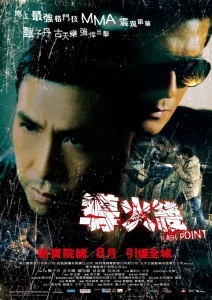 On the filmmaking front, Wilson Yip (who also directed Ip Man) handles the directorial duties exceptionally well. He’s got a great eye for nice visuals and Flash Point looks amazing throughout. He relies a little too much on flashy, modern filming and editing techniques (such as digitally speeding up the middle of a shot that contains a camera movement to keep the film always “action-packed”), but even these fumbles are not enough for me to ridicule the film. It’s just aesthetically a little too slick for my taste, as I prefer the lawless 80s and 90s when Hong Kong cinema was at its peak, but I recognize that this is a nitpick and a personal preference.

Flash Point may not be the high-octane martial arts film I hoped for, but it is a fast-paced cops and robbers action movie that features a phenomenal end fight. I’d definitely recommend it to fight fans and Hong Kong movie fans alike; regardless of expectations you’re guaranteed to get some fun out of this one.