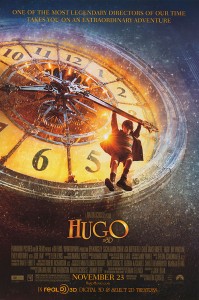 And boy, are there a lot of those. They kind of sneak up on you too (even though I knew they were coming), as they seemingly have nothing to do with the plot when they first start cropping up around the halfway mark. They are slowly doled out over the remaining course of the film, and while this is easily the best part of the film, it’s still pretty detached emotionally and feels self-indulgent. None of the characters were developed enough for me to form any connection with them, so consequentially it made the film seem like it wasn’t as concerned with telling a character-driven story as it was educating people on silent film. It definitely has its moments where it works great, but I was unable to truly dive into the film.

One of the reasons I stayed on the fringe of the story was the incredibly contrived nature of the entire film’s plot. We’re expected to believe that something like five giant coincidences all came together to bring these exact people together at this particular moment. OK, so sometimes that sort of thing does happen, but if you start digging and you realize that just about everything in the film is based on reality except for Hugo and the story of his automaton, you’ll also realize that everything related to Hugo is where the film logically falls apart. 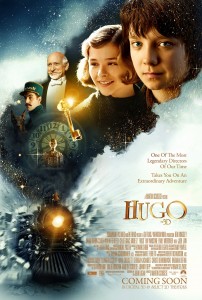 OK, you say, “It’s just a movie. Have fun with it!” I tried, but beyond the contrived plot points intersecting with reality there’s also the lack of creativity on the part of Scorsese. This is like Spielberg’s The Adventures of Tintin, a film where a respected director who has a confident control over his craft ditches nearly all of that and embraces every bullshit modern filmmaking trope available to him. Was McG teaching a class down at the Learning Annex and Spielberg and Scorsese decided to check it out? I know I might sound like an old man bitching about the good ole days, but damn it, cameras can’t go through windows. I don’t want to see it. “Movie magic” has been available to filmmakers ever since Méliès, but one thing has remained constant: the physicality of the camera. Advances have been made to free it up, such as Steadicam, but it still remained a physical object ruled by the laws of physics. A virtual camera completely frees the camera (and it’s understandable why this might sound exciting to a director), but for me it betrays everything that film is. Digitally masking edits to create one seamless, impossible shot is absolutely one of the greatest travesties of the modern era of filmmaking, and goddamn if Scorsese doesn’t do it in Hugo numerous times. Imagine if that amazing tracking shot in Goodfellas, the one that goes all the way from the car, down the stairs, through the kitchen and into the club was achieved through multiple, masked edits on a computer. Would you have the same respect for the shot, or for Scorsese? No, it wouldn’t even have half the power it contained. The shot is amazing in its artistry and a joy to watch because the reality of it is undeniable. The move to virtual cameras and masking edits between CGI and actual footage removes all the power and artistry of a shot such as this and it kills me inside every time I see it being done by a respected director. I’ve been told I don’t like it because I don’t like change, but no, I don’t like it because it’s disingenuous and is ruining film. Compromise and ingenuity are a good thing; you’d think a film glorifying Méliès would understand that.

On a more positive note: Ben Kingsley is fantastic as George Méliès and I wish he was in the movie more. I thought Asa Butterfield who played Hugo was pretty lackluster, but his female sidekick played by Chloë Grace Moretz more than made up for his shortcomings. Sacha Baron Cohen played his character well, but I HATED his character. He’s neither interesting or entertaining, and honestly he could have been cut completely out of the movie and no one would have cared. Well, no one except Sacha Baron Cohen.

I think I would have enjoyed Hugo more if I knew less about it going in. I knew virtually all the major twists, although I was unaware that they were the big reveals of the film. Even still, I enjoyed Hugo for what it was and I did like seeing Méliès get some mainstream credit for the amazing work he did to create and further the sci-fi/fantasy genre in film. The scenes within his studio are excellent and it’s truly magical to see the sets and scenes from these iconic films recreated for this new, big-budget production. They go a long way to showcase the inventive spirit and the sheer amount of work that went into his films; I only wish that Hugo shared that same spirit. If nothing else, Hugo did work on me in one key way: it excited me again to delve into the work of Méliès, rekindling a bit of that old feeling I had for silent films during my discovery of their magic many years ago.