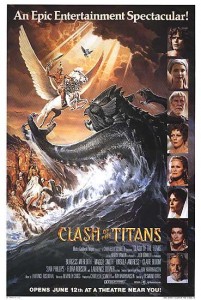 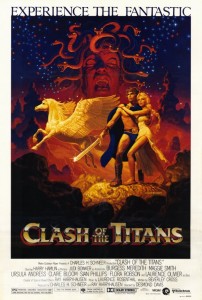 In addition to the wonderful stop-motion, Clash of the Titans features a ton of other FX: from Calibos’s monstrous facial makeup to detailed city models of the God’s Mount Olympus dwellings, early green screen tech and a ton of image matting and compositing, bringing multiple filmed images into one. Some of these are more successful than others, with the green screen ranging from the transparently awful to really well-integrated awesome. A good example is whenever they release the Kraken, the film first cuts to Poseidon underwater opening the gate. One of the shots is a long shot with a huge gate filling most of the frame and Poseidon very small in the right corner pulling a lever… or I think that’s what he’s supposed to be doing. It looks more like someone’s first attempt at a collage with thick, imprecise cuts and an abstract meaning lost on the viewer. It looks like exactly what it is, a dude cut out of one image and composited on top of another. Thankfully they only show this a couple of times. Just a few moments later, the Kraken releases powerful tsunami waves on the city, destroying buildings and people alike with the crushing power of the water. The city looks to be made of models while the people are composited on top of them, so when the water rushes through, the buildings crash down & the people get swallowed up without any danger to them. This results in a much more dangerous, exciting image than if there were no people in the frame. These shots look incredibly well-done and sell this destruction perfectly.

Where Clash of the Titans fails a bit is its lead actor and the plodding nature of its story in the first hour. It’s all interesting and there’s great moments throughout, but it could have been tightened up quite a bit. Harry Hamlin who plays Perseus gets the clueless young man thing going pretty well, but I had a hard time taking him very seriously, as the movie intends for his tale to be taken. The scenes with Laurence Olivier and the Gods did little for me as well, although I did enjoy the clay model thing they had going with the mortals and those blue lasers shooting out from behind Olivier’s head were pretty awesome. What can I say, I’ve never been much of an Olivier fan because while he’s excellent at what he does, I find him very stuffy and here he’s stuck in Mount Olympus with a bunch of equally stuffy individuals. No thanks.

Clash of the Titans feels like a throwback to the rousing adventure films from the 50s and 60s (or even the Errol Flynn swashbucklers of the 30s), but done with an absolutely ridiculous amount of FX. In this way it reminds me of current cinema with its penchant for 80 remakes and 80s homage films like The Expendables or Super 8. I’m sure a big part of the pitch meetings on these went something like, “It’ll be like an 80s movie, but now we can go bigger & better than ever!” Insert 60s instead of 80s and I think you’ve got the Clash of the Titans pitch as well. A big reason why these new films are bullshit to me is that I don’t generally care for modern FX, but realistically it’s the same premise as Clash of the Titans. With nostalgia for the films of a past era, the filmmakers do their best with current day FX to capture such a feeling. Clash of the Titans succeeds in capturing the feel they desired without mashing it into the ground under the weight of its FX, as the film actually feels like a 60s movie to me (something I cannot say about the other films mentioned).