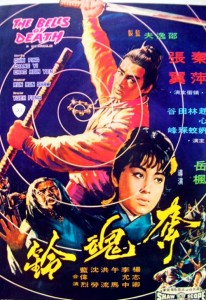 The Bells of Death, like the other Griffin Yueh Feng films I’ve seen, is very confident and sophisticated. The shots are all perfectly orchestrated and edited together, enhancing the viewer’s pleasure as the film plays out. The action scenes are specifically impressive as the fights are all iconic and memorable, expertly choreographed and acted. Due to this high standard of quality, The Bells of Death is one of the rare early Shaw Brothers films that can transcend its era and remain exciting to viewers today. It doesn’t feel at all like the unsure films from the studio the came out around it, it emerges as a distinct, impressive film that should delight martial arts fans.

In addition to Yueh Feng’s direction, a big reason the film succeeds is its star Chang Yi. He had starred in a few earlier Shaw Brothers films to varying success but here he emerges as a definite force to be reckoned with. He really should have become a bigger star, but instead I know him as “The dude that fights Bruce Li on the rocks at the end of Exit the Dragon, Enter the Tiger.” I hope to remedy that in the future and check out his somewhat lengthy and varied filmography. What’s great about Chang Yi is the transformation he exhibits on-screen. In the opening he is a bumbling teen chopping wood, unsure and unable to defend himself or anyone else. A chance meeting with a noble swordsman changes all that though, and in the space of a single cut, he becomes a cold, confident, expertly skilled swordsman. If this film had been made a few years later there would have been a twenty-minute training sequence, but as much as I love a good training, I appreciate the brevity used here.

The kung fu is over-the-top in the most fun way possible too. One of my favorite moments is when Chang Yi is confronted with a small group of bandits asking him for payment. He summons up the wind, collecting a pile of leaves ripped from a nearby tree in his hands and throws them at the men. The men are frozen in awe as they peel leaves from their faces, leaving bloody wounds in their place. There’s also dudes getting knocked through brick walls and wonderful moments of gore, including a mid-fight decapitation (possibly the first decapitation in Shaw Bros history) during one of the best fights in the film. I don’t want to paint the wrong picture though, as The Bells of Death is definitely more serious and realistic than these varied moments make it seem. These are but the icing on the cake, the cherry on top of a wonderful cold dish of revenge.

The Bells of Death is skillfully written and shot and is an absolute joy to watch. The fights are plentiful and awesome, feeling much closer to the iconic style of fights martial arts fans are accustomed to. The bamboo forest fight is especially great, exuding tension and suspense. I highly recommend this one to all martial arts fans.

Not the original trailer, but it’s the best I could find.

Next up in this chronological series of the Shaw Brother’s martial arts films,  it’s That Fiery Girl with Cheng Pei Pei!