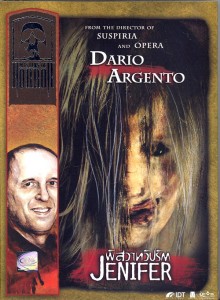 In addition to the thin story (it was adapted from a ten-page comic), some of the dialogue and the accompanying acting are as horrific as the gory visuals. It’s not enough to keep anyone away or make me think of Troll 2, but it is enough to yank you out of the scene, perhaps eliciting a groan and a loss of respect for the film. It does feel like an Argento film though, even without Goblin and his trademark first-person POV shots. There is one track of the musical score that’s highly reminiscent of Goblin’s Suspiria score when a child’s voice and tinkly bells punctuate tender moments, but everything else is pretty standard horror music.

According to the World Wide Web, Jenifer was the only aired episode of the Masters of Horror series that had to be edited for release. Two scenes were cut, both revolving around perverted depictions of oral sex. I haven’t seen the footage that was cut (it was later released on the DVD), but I find it somewhat disturbing that there are no issues with a child’s severed torso being furiously devoured in stunning realism, but somewhat graphic depictions of sex are taboo and strictly forbidden. I’m sure the footage was unnecessary (I certainly didn’t feel the movie required it), but it just strikes me as an interesting balance of priorities that the American censors have.

Jenifer isn’t anything spectacular because of its story issues, but it is well made and Argento fans should definitely give it a spin. Don’t expect anything special, but from what I gather, most of his late period stuff is like that. Oh well… at least it was better than the awful Four Flies on Grey Velvet.