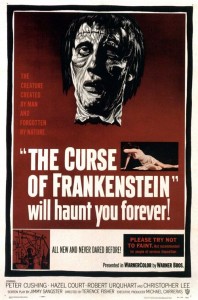 So everyone knows the basic story of Dr. Frankenstein becoming obsessed with creating life from corpses instead of the traditional, sexual means, but right from the get-go, The Curse of Frankenstein takes a different route. Instead of starting us off with Frankenstein as a mad scientist experimenting in a laboratory, this film opens with the Baron Victor Frankenstein (Peter Cushing) locked in a jail cell for an unknown crime, telling his tale to a priest who has come to presumably take his confession. Frankenstein starts his story when he was a teenager seeking a tutor. He hires Paul Krempe, a man who shares Frankenstein’s love for science and exploring the limits of knowledge. After a couple of years Paul has taught Victor everything he knows, but instead of going along on his merry way, the two continue to work tirelessly together, driving each other forward and making new scientific discoveries as a team. Herein lies the major struggle of the film. As Victor descends more and more into obsessive madness, Paul is the only one who truly knows what’s going on with his old friend and the only one capable of stopping him. 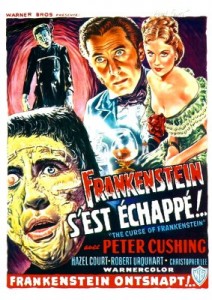 The film is quite grotesque for the 50s, with severed body parts and gushing blood punctuating key moments. As with any old film, it’s nothing compared to modern gore, but what’s here continues to be effective and horrific. This Frankenstein is much more sadistic and active than previous incarnations, actively stealing body parts himself instead of delegating the job to his hunchback assistant Igor. Paul (essentially in the Igor role) has neither a hunchback or a rose-colored “master/slave” relationship with Victor. They are peers in their field and so the relationship is deeper than anything Frankenstein and Igor could ever have, and as such, it is a big reason this version is superior. The more active Frankenstein reminds me more of Jeffrey Combs in Re-Animator than any Universal Frankenstein, and it’s clear that this film (and presumably the other films in the Hammer Frankenstein series) had a major influence on the creation and shaping of the Herbert West character in Re-Animator.

The focus here is locked on Victor’s incessant, driving will to succeed and while he’s the true villain of the film, he’s also the hero. As distressing as his descent into madness is, there are definite moments when he makes the viewer side with him and think about the possibilities of his work, should it have been carried on without the interference of others. Conversely, his creation (played wonderfully zomberific by Christopher Lee) is almost sidelined entirely, only appearing late in the film and never achieving the screen time or importance that Karloff’s version receives in Frankenstein. The focus on Victor in this film (and Cushing’s excellent portrayal) is another aspect that sets The Curse of Frankenstein apart from the Universal original.

The sets, while mostly small-scale indoor rooms, are all superbly constructed. The laboratory is a prime example of the conditions a mad scientist should be working under, with spinning devices and large wall switches, bubbling beakers and burners heating all manner and color of liquids traveling through a maze of tubes. The sets are lit well and with great atmosphere, adding a distinct Gothic feeling to the proceedings. I’ve always thought of the Hammer Studios as an English equivalent to Hong Kong’s Shaw Brothers, in terms of quick, relatively low-budget film productions utilizing a contained troupe of actors in all their movies. Like the best Shaw Brothers films, you’d never know this was anything but a grand, wonderfully produced horror film. According to my research this film cost £65,000 (roughly $100,000 in current US dollars). I tried to find some budgets from other 1957 films to compare to this and while I didn’t find many, the ones I did find were all between $3-5 million. Even a courtroom drama like Wilder’s Witness for the Prosecution apparently cost $3 million! To know this, and consider what was achieved in The Curse of Frankenstein only makes the film more impressive.

Terence Fisher was Hammer’s premiere horror director and this was his first big movie for the studio. His camerawork in The Curse of Frankenstein tends to lean more towards the static shots of 30s and 40s classic cinema, but there are definite flourishes that set it apart. The big monster resurrection scene is especially tense and exciting because of his fantastic shot selection and flawless editing; every cut amping up the tension in the room as the power of the electricity courses through the water tank and into the monster’s lifeless corpse. The scene is nearly dialogue free and is one of the best in the film. The inevitable reveal of the monster as a living entity is equally impressive, with what is probably the best single shot in the film. Peter Cushing opens the door to his laboratory and the camera slides into the room to showcase the bandage-wrapped beast. A few shots later, the monster removes his facial wrappings and the camera follows a similar trajectory, quickly moving closer to make sure that every member of the audience gets a good close-up look at his hideous, scarred face.

The Curse of Frankenstein is an absolute triumph of 50s horror cinema and it’s ridiculously easy to see why it spawned a long-running series and an entire studio’s shift towards horror, much like Chang Cheh’s The One-Armed Swordsman did for the martial arts output of the Shaw Studios. The film is incredibly well made and produced, and if the other Hammer films are even half as good, they’ll be an absolute joy to experience. My only regret is waiting this long to finally start checking them out. If you enjoy the story of Frankenstein, or classic horror in general, you owe it to yourself to check out this gem of a movie.

Come back tomorrow as I take a look at the first episode from Showtime’s Masters of Horror series, the Don Coscarelli directed Incident On and Off a Mountain Road! And next Thursday will bring Christopher Lee in Hammer’s take on Dracula!