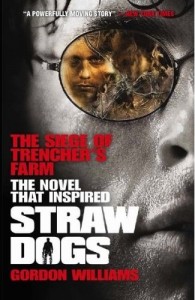 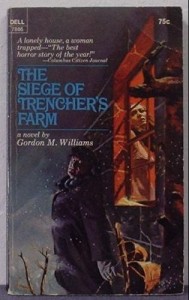 The book is skillfully laid out, with the first few chapters strictly dedicated to setting the scene and the characters in the reader’s mind. This section is somewhat slow, but understandably so, and despite this it never fails to be interesting. Each chapter builds upon the one before it, which may seem like a given, but it’s done here with such subtlety in the early chapters that it’s only after finishing the book that you realize how well done it really is. The puzzle pieces are slowly and deliberately laid out, with each character built up individually before they all inevitably converge in the second half of the book.

Right before they do come together, there’s a great “Oh, shit” moment when the course of the rest of the book becomes clear. The book’s slow-burn intro becomes understandable and necessary in this moment and the reader is powerless to do anything but continue turning the pages. The suspense in the latter half of the book is unparalleled and truly frightening. George’s descent into violence is handled in such a way that I was equally triumphant and revolted at the same time. His character arc has broader implications for the violence of society as well, and I’m still conflicted on exactly how I feel about the situation presented within the narrative. At the heart of the story is a true moral dilemma and every reader will find themselves questioning their beliefs as they take the journey with George and his family. By the end of the book some of the violence becomes so revolting and grotesque that even I, the jaded horror gorehound, was sickened by what I was reading.

There’s a lot of themes floating through this book, and surprisingly they aren’t hidden in subtext and hyperbole. No, they’re right in the forefront of George’s thoughts throughout the book. I don’t think I’ve ever read a book with all its cards on the table like this, and I gotta say, I enjoyed it. It makes it all easier to understand if nothing else. It also makes sense within the narrative, so it may sound like its somewhat clumsy and heavy-handed but it feels like a conscious decision on Williams’ part and not poor writing skills.

Running alongside this struggle is the tension between George and Louise. Because George is an effeminate bookworm, his wife Louise has stepped into a more masculine role and they fight from the first moment they appear together in the book. This I can understand, but where Williams chooses to take this aspect of the story is much too black and white and is easily one of the low points of the book. If I’m to believe the resolution of this conflict, then I should immediately start slapping my wife and telling her off to gain some respect. Yeah, that’ll go over well. 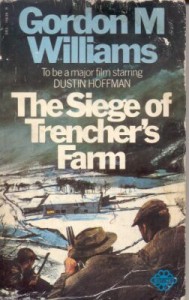 Besides the excellent tension, the book excels in its small moments with supporting characters. One of my favorites was when the Doctor comes to call on a house and is greeted by Bobby, a teenage boy. Before answering the door, Bobby was looking at his father’s stash of nudie mags in the attic, so when the injured doctor comes asking for help and then promptly passes out, the kid chooses instead to go back to the attic because he doesn’t know when he’ll get another chance like this at the mags. This moment seems so real and unscripted to me and it’s one of many choice moments that color the experience of reading The Siege at Trencher’s Farm, making the book that much more enjoyable.

Now if I’m being critical, the writing here is mostly very good but not without its flaws. In the early chapters there’s a lot of telling instead of showing, with Williams jumping in and out of scenes and flashbacks at will, going from broad scene-describing prose to a few key lines of dialogue and then back to a more withdrawn expositional position. It’s hard to get a handle on what is going on at times, as the scene will jump from one sentence to the other without any notice or break. If readers are diligent enough to make it to Chapter 5, they’ll find this style fades away as the real meat of the story picks up. My other main concern with the writing is the perspective shifts that happen consistently throughout the book. I love that the book has so many perspectives, making each character unique and memorable, but when the perspective changes between characters during a chapter, sometimes even mid-paragraph, it’s hard to continue reading without stopping and getting your bearings.

The book shines as the tension builds though, and any problems I had with the writing were quickly washed away as the stakes consistently rose. The tension in the book is thick as molasses and Williams’ sharp dialogue escalates the scenes naturally. The story really blossoms after the first few chapters, as the night sets in and the siege begins, the focus staying primarily on the scene at hand within the farmhouse. The Siege at Trencher’s Farm is an excellent book overall, one of the most thrilling and exciting books I’ve ever read. Despite some minor issues I had, it exceeded all expectations and delivered a competent story of terror. The ending is a bit weak and oddly humorous, but it didn’t change my enjoyment of the book at all. I don’t know how women would react to this one, but if you’re a bookish man that ponders the nature of violence, you’ll surely relate to George and enjoy this book as I did.

The Siege at Trencher’s Farm has long been out-of-print, but is being republished by Titan Books tomorrow on August 16, 2011! You can pre-order the book at Amazon right now, or pick it up at your local retailer tomorrow. Get yourself a copy of this excellent and very exciting book!

Be sure to come back tomorrow as I take a look at Sam Peckinpah’s controversial and infamous filmed version of The Siege at Trencher’s Farm, 1971’s Straw Dogs!

Full disclosure: This is my first book review since grade school book reports. I don’t plan on making this a permanent site feature, but I was approached by Titan Books and provided with a review copy of the book, which I gladly accepted.