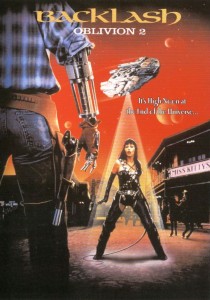 Thankfully I am wrong in my apprehension, as Oblivion 2 only gets better and better as the minutes tick by. The story here centers around Red Eye’s main squeeze and sidekick Lash, the red lipstick-wearing, seductive villain with the electrified whip. A smooth bounty hunter named Sweeney comes to town looking for an intergalactic fugitive and Lash is the prime suspect. Sweeney (played by Maxwell Caulfield) is a fantastic new addition to the character lineup and brightens every scene he’s in. Caulfield plays Sweeney with the confident air of a respectable gentleman with the witty dialogue to match. This is the kind of role Hugh Jackman would have gotten had this been a big-budget film and he made more fun career choices. 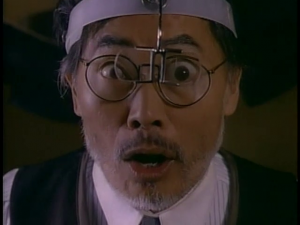 The two Oblivion films were shot back-to-back so basically everyone from the first film returns to reprise their roles. This one feels like it had a slightly lower budget for some reason though, but perhaps I can attribute that to the lower quality video on the DVD. Oblivion was recently remastered and released on DVD for the first time ever a few months back, while Oblivion 2 is simply a port of the VHS rip to DVD. There’s noticeably fewer special FX in the second installment, at least until the final forty minutes or so. At that point, everything screenwriter Peter David has built up comes to a head and bursts, and the viewers reap the ooey, gooey goodness of a multitude of FX. With morphing heads, canes shooting lasers, collapsing cave walls and a giant Godzilla-size tortoise busting out of a mountain, the second half of Oblivion 2 is absolutely chock full of fun shit.

At the end of the day, Oblivion 2 is a lot of fun to watch because the characters are all fairly well-defined and likeable. It feels more like Episode 2 of a television series, following a “Television Event” series premiere movie, than an actual movie but there’s nothing wrong with that. Characters that had big parts in the first film, such as George Takei’s doctor, are sidelined here for bigger roles from characters that got shortchanged in the original such as Julie Newmar’s Miss Kitty. This is done in just the same way that characters in a television series ebb and flow with the weekly stories. It’s a shame they only made two of these honestly, because I’d love to see another high-stakes adventure with the interesting crew they assembled. If you enjoyed the first film, or if you’re a big sci-fi western fan, you’ll have a good time with this one. I’d recommend checking them out in order for the full effect, but the intro recap could probably suffice in a pinch if you’re short on time.

Next week, I’m going into uncharted territory as I review my first Full Moon kids film! After throwing a bunch of titles at Netflix, I’m going with the first one that came up as available, 1999’s Mysterious Museum! Let’s hope it’s not total shit!