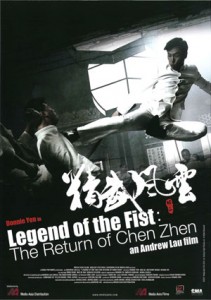 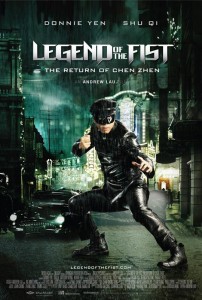 Chen Zhen is a fictional Chinese hero that helped fight against the Japanese invaders after World War I. He was first introduced to moviegoing audiences in the Bruce Lee classic Fist of Fury and was later memorably portrayed by Jet Li in Fist of Legend. Donnie Yen is another great fit for the role. He does a wonderful acting job here and you know his fighting is second to none. So what’s the problem? Uh… basically everything else. First of all, to call this an action film is a total joke, as there’s maybe ten-fifteen minutes of action in the entire 105 minute runtime. The rest of the time is filled with ridiculous song and dance numbers, talking heads and poorly written characters that you can’t connect with. This film has more in common with those lackluster early period, Chinese opera-influenced Shaw Brothers films than the Hong Kong action heyday. There’s a reason they stopped making them like that and we don’t need to move backwards. The main problem other than the lack of action is the script, which is nearly incomprehensible at times. At its heart, the story is very simple so I’m at a loss to explain why the film seems so complicated. They do bring all the threads together in a fairly satisfying moment at the end of the film, but it’s much too little too late.

The action scenes are great when they come around, but the story is told so poorly that you may have fallen asleep by the time they do. The opening war scene is one of the best in the film, but my favorite scene was either the fight in the newspaper office or Chen Zhen’s début fight as the Masked Man in the streets of Shanghai. Both scenes features fantastic action and choreography, not to mention some of the best non-flying wire-work I’ve ever seen on film. Never before have dudes that just got punched rocketed across the screen and through every obstacle in their path with such force. I loved every moment of this and it’s a shame the film surrounding them had to turn out so poor.

If you’re hard up for some martial arts action, re-watch Fist of Legend or Iron Monkey, and if you’ve got your heart set on something new… watch True Legend instead. I cannot recommend Legend of the Fist: The Return of Chen Zhen in any instance other than to die-hard martial arts completists who will watch the film regardless of what they hear about it… like I did. And if you do choose to brave these waters, it’ll be a much more enjoyable experience if you keep the fast-forward handy and only watch the fights. Trust me.