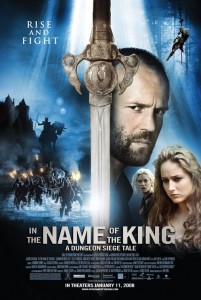 I was ready for battle, ready for a fight against the hellspawn’s evil filth to test my every fiber, but it never came. The hellspawn never ate their Wheaties. In the Name of the King is fuckin’ child’s play when it comes to shit movies, because at the end of the day, In the Name of the King isn’t terribly bad. Where it goes most wrong is in its casting, where obvious fuckups present themselves readily. Burt Reynolds as the aging king? Not a high point on the resumes of casting directors Eyde Belasco & Maureen Webb. Matthew Lillard in any role in any movie? Yeah, what the fuck? Ray Liotta is not a great choice for an over-the-top villain, but damn if he doesn’t give 8000% and ham the fuck out the role. He may have turned a lot of people off over the course of the movie, but for me there really isn’t a movie without him. That ham is mighty salty, but it tastes so good going down. 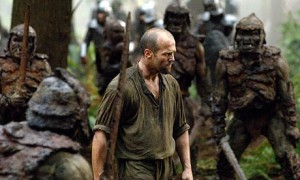 Jason Statham on the other hand is a total success, lending a lot of honest credibility to the movie. This is only the second film I’ve seen of his, the first being The Expendables, and I am once again impressed with his skill as an action star. He looks awesome busting out flip kicks and wire-working over orcs heads during heated battle sequences. The opening fight in which he single-handedly takes on five or six of the buggers is a great way to set up his character as a all-purpose farmer badass. Credit must also be given to Uwe Boll and editor David M. Richardson who actually edited the fight scenes together in a manner you can follow, without too many quick cuts and plenty of full body shots to allow the viewer to actually see the choreography. A quick glance over Richardson’s filmography reveals that he also edited a bunch of Johnnie To Hong Kong films, so perhaps that can be given as a reason why the editing has something of a Hong Kong feel and isn’t so Hollywood mainstream.

The honeymoon has to end though, and in reality there’s a ton of the movie that’s just plain boring. Part of that could be that I inadvertently rented the Blu-ray edition which only features the 165 minute director’s cut (the theatrical cut was roughly forty minutes shorter), but from what I’m seeing on the webs, the director’s cut is a better film and a lot more coherent. I can’t comment specifically but it definitely could have been tightened a lot, perhaps somewhere between the two editions for a more flowing and exciting narrative.

Oh and speaking of the narrative, it’s pretty basic fantasy stuff. A farmer is a badass and doesn’t know who his parents are. Oh fuck, I wonder if this dude is the King’s long-lost son? Turns out he is! I can’t place that blame on this movie though, as virtually every fantasy movie or book I’ve read uses some variation on this plot. There are lots of Lord of the Rings moments as well, so this definitely feels like a B-movie version of an epic tale. Except the tale isn’t really epic, it’s rather simple, and it’s overly complicated by having too many characters. Hey wait, this kind of sounds like a video game story. Oh right, “A Dungeon Siege Tale”… it is. So anybody knocking this for not having Lord of the Rings‘ epic story can just shut the fuck up because that film was based on the most popular fantasy story EVER and this was based on a marginally popular PC-only video game. No offense to Chris Taylor and his Dungeon Siege game intended though, I only seek to illustrate a point. 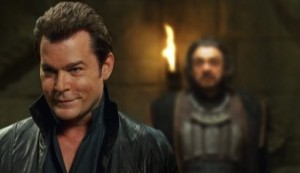 In any case, if you can work your way through the boring sections, this movie actually has a lot to offer for fans of B-movies that also enjoy fantasy. The battles are pretty exciting and fun to watch, with lots of great moments sprinkled throughout. My favorite of these was during one battle in the forest where the orcs string up a slingshot catapult between two trees and then launch themselves into the fray of battle. CUT TO: shot of orc and camera flying through the air facing the camera, just like the shot from the opening to Evil Dead 2. I was rolling. Then when that didn’t prove the most effective, they got proper catapults, lit themselves on fire and then launched themselves in battle. You gotta admire that dedication.

In the Name of the King is not a great film. It’s not even a good one. It is a fun one though, and will provide enjoyment for those in the right mindset (Hint: Don’t think about it too much). Your mileage may vary though as this film is a ridiculous 4% on Rotten Tomatoes. Everyone likes to call Uwe Boll the worst working filmmaker, but if this is anywhere close to how his other films are, then not only is he not the worst, he’s better at his craft than some A-list directors.