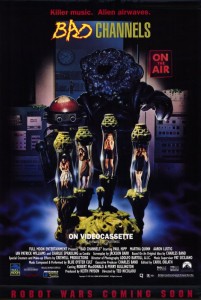 Sound okay, right? Bad Channels reminded me a lot, almost instantly, of an old Empire film called TerrorVision. I was not surprised then, when I found out both were directed by the same man, Ted Nicolau. I don’t want to rake him over the coals too much because realistically both films are well-made and achieve a distinct tone that is rarely seen in the cinemas. That tone just doesn’t do it for me though. It’s sort of an R-Rated combo of 1950s alien sci-fi and The Three Stooges, but like TerrorVision before it, it has an undeniable feeling of being a kid’s alien comedy, or at least one I would have enjoyed a lot more as a kid. Again, this isn’t necessarily a bad thing, but it leaves me wanting without providing any real laughs.

What the alien disc jockey is exactly after is never clear, but for some reason he’s interested in capturing and shrinking the beautiful women of the town and keeping them in jars that look like lava lamps. In order to lure these women into his jars, he sends a song out over the airwaves just for them that creates a hallucination in their minds. What kind of hallucination? A rock video of course, it’s 1992! My favorite of these was the blatant rip-off of Nirvana’s Smells Like Teen Spirit video where a grunge-ish three-piece band plays a grunge-ish song in a high school gymnasium with cheerleader backup dancers. Despite the similarities, it was the most enjoyable song of the bunch for me. The film is also notable for its soundtrack, most of which was composed by Blue Oyster Cult. They do not appear in the film, but all the incidental music is theirs. The music videos themselves are each handled by a different band, which were all pretty forgettable to me, but some Internet searches reveal that the clown-masked band (No, not Insane Clown Posse) seems to be fairly popular among fans of the film. 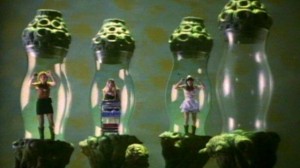 The acting is actually pretty good from the entire cast, at least during the first half. I stopped paying close attention after that. I suppose I should add a “for a Full Moon” qualifier onto that first sentence too, but I think I’m safe not too at this point. The film is well-made and the FX are pretty good, but as I mentioned above, I just couldn’t get into the groove of the movie. I enjoyed the alien’s robot sidekick that helps him pull levers and whatnot, but more for his exposed brain in pink fluid than for anything special that he did in the film. Imagine R.O.B. the Robot, the Nintendo Entertainment System’s early pack-in accessory that stacked blocks poorly, but with a big pink brain in a glass dome on his head. The robot does get to do one awesome thing towards the end of the movie… explode into a million smithereens! It adds a lot of much-needed excitement and punch to the film, but it’s far too little too late. The scene alone would be a great addition to any explosion compilation tape though. Or explosion YouTube clip. Or whatever those wily kids are using to put video together in the future.

There’s not a whole lot good I can say about Bad Channels. It starts off OK and goes downhill from there, following a very clichéd and boring path to its destination. After the credits there’s a short scene with Tim Thomerson as Dollman that was probably my favorite scene in the film, so that says a lot about my level of enjoyment for the film proper. In any case, the Dollman cameo ties up one remaining loose string from Bad Channels, which I’m assuming will be played out in more detail in next week’s film.

I’m glad you asked! Next week, I’m gonna take on the sequel to not one, not two, but three Full Moon movies! It’s the genre-mashing, kitchen-sink extravaganza Dollman vs. Demonic Toys!