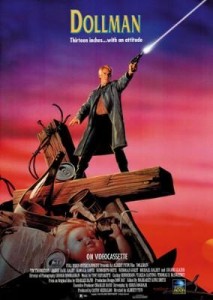 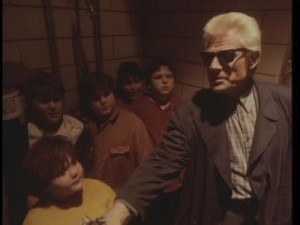 Dollman wasn’t always small. On his home planet of Arturos, Brick Bardo (Tim Thomerson) is a take-no-prisoners, get-shit-done cop that plays by his own rules. The rules of cinema dictate that this type of character in this era of filmmaking must confront his commanding officer and turn in his gun and badge, but before this inevitable scene, Bardo finds himself kidnapped after proving his unique methods of hostage negotiation in a tense Laundrymat (their spelling). Who could kidnap such a badass cop, you ask? Only Bardo’s evil nemesis Sprugg, who’s now nothing more than a head on a flying platform.

I don’t know about you but anytime there’s a head on a flying platform in a movie, I’m sold. It’s not an itch that gets scratched too often, but ooo-wee it’s a good ‘un. This particular head on a flying platform is especially satisfying too, with a convincing dummy double holding down the long shots, while Frank Collison gives a deliciously fun, heady performance in the close-ups. You’re probably wondering how he got to be a head on a flying platform. Through numerous encounters with Brick Bardo and his Proto Blaster, that’s how. Bardo’s gun is “the most powerful handgun in the universe” according to Brick and the first time it lets loose… HOLY SHIT, he wasn’t kidding.

After being kidnapped, it looks like Bardo’s number is up. Sprugg’s henchman aims the Proto Blaster at Bardo. Suddenly, Bardo reaches his hand out and his palm glows with a magnetic center! The gun flies into his hand and he fires. The henchman forcefully explodes into a million pieces. It took me by such surprise that I burst into fits of laughter. Full Moon generally keeps their gore and FX to the bare minimum to keep the budget low, but Dollman spared no expense in this sequence. It’s one of the best exploding bodies in the history of filmed exploding bodies. Bardo blows apart another dude and then taunts his still-alive head and meaty half-torso. Sprugg escapes into a flying saucer and Bardo jumps into a ship of his own. They continue the chase into the black of space, where they end up flying through some wavy lines that dimensionally transport them to Earth. Only problem is the size ratios are different here, so Brick Bardo is only thirteen inches tall. Hence…

Yeah folks, at least for me, Dollman is one hell of a good time. It has it all, exploding bodies, heads on flying platforms… well maybe it doesn’t have it all, but damn if it doesn’t have enough to satisfy handily. You also get a “before you knew him” section, because in addition to Sprugg, the film’s villainous, gang leader shoes are filled by Jackie Earle Haley. You may already have been familiar with him because Haley was an acclaimed child actor in The Bad News Bears and Breaking Away, but when he career dissolved into roles in films like Dollman, Nemesis, and Maniac Cop 3… he took a thirteen year break before returning to acting and eventually landing much more high-profile roles in Watchmen, the remake of A Nightmare on Elm Street and Shutter Island. He’s good in this film too, if a bit over-the-top… but when a lot of your scenes involve talking to a two-inch head on a flying platform (Sprugg didn’t escape the shrinkage either) or you’re hunting down Dollman, over-the-top is perfectly acceptable. Tim Thomerson turns in another fun hard-boiled performance that is essentially a pint-sized Jack Deth from Trancers. If any of this sounds fun, I highly recommend it!

Next week, I’m going to venture down the toy aisle, as I check out another Full Moon classic, Demonic Toys!