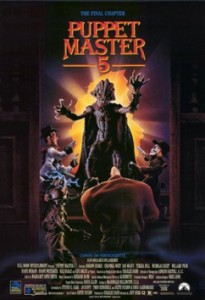 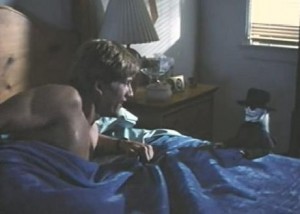 To start with, Puppet Master 5 is just plain boring. It feels like they went back in time and sucked all the boring out of the previous four films and dumped it back into this one. It’s awful. The plot is so lazily constructed that it seems clear that Charles Band saw only dollar signs when the idea to film two Puppet Master films at once came across his desk. The funny thing about it is just how night and day it is with the previous film. With Puppet Master 4, I was greatly impressed with the plotting, the direction and the acting. I am rarely intrigued by all three aspects in a Full Moon movie. Director Jeff Burr’s great, inventive shot selection in Puppet Master 4 gives way here to boring, static filmmaking in a multitude of half-lit locations. The acting takes a huge nosedive as well. I’m just floored at how different the two movies are, despite being shot at the same time. This leads me to believe that the differences found here were somewhat calculated, but if so, they are miscalculations for sure.

The FX here are by far the best part of the film, but even they aren’t the most exciting. This is the last Puppet Master film to feature the excellent stop-motion work of Dave Allen and he has some great stuff on display here. Like all the films in the series, its use is limited due to the budget, but you’d never know it just by looking at the quality of the work. I’m always impressed with what Allen and his team can pull off with stop-motion and Puppet Master 5 is no exception. The rod and cable puppets don’t fare as well, but this isn’t to say that they look bad. They move well and each puppet has its own character and movement style. The demon totem puppet is especially expressive in its movement and it is later revealed to be Full Moon’s “most advanced puppet yet” in the VideoZone featurette that follows the film. 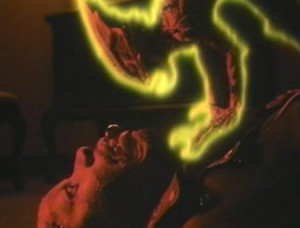 I did find great enjoyment out of one small aspect of Puppet Master 5. Throughout the series, the puppets have been thrown against walls, and in Puppet Master 5 they finally get a chance to try it out themselves. It’s incredibly gratifying to see one puppet throw another against a wall. Trust me. True, it doesn’t have the same wallop that a human can put behind it, but it’s still enjoyable to watch nonetheless. I’ll also never get tired off Decapitron’s faceless head morphing into Guy Rolfe so he can spout some bullshit puppet master wisdom.

Puppet Master 5 was designed as the end to the Puppet Master series, but this isn’t readily apparent as the film ends just as open as any of the preceding stories. It also doesn’t have an even remotely satisfying ending, something you’d think would be a given if Full Moon wanted to truly end their flagship series. The VideoZone featurette also reveals that while this was meant to finish the main series, a new series called Puppet Wars was to start up soon after. Like many of Band’s projects, the funding fell through and the Puppet Wars trilogy never happened. Apparently it was to feature the puppets we all know and love fighting tiny versions of classic Universal monsters. Sounds stupid and promising all at once, but it was not to be. Maybe this idea was later rolled into the 1997 film, The Creeps?

Next week I’ll be checking out the film that rose from the ashes of the failed Puppet Wars film, 1998’s Curse of the Puppet Master!