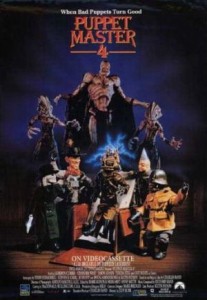 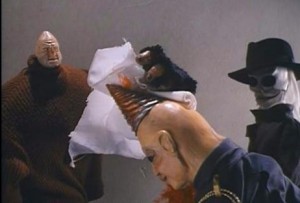 A team of researchers study the premise of creating true artificial life that exhibits reason and will. One of these researchers happens to be the off-season caretaker of the Bodega Bay Inn, and when he discovers Toulon’s trunk of puppets and the secret it contains, it excites him and reinvigorates the project like he never could have dreamed. This attracts the attention of the demon Sutekh, who is angry that Toulon controlled his power of animating inanimate objects. Sutekh sends some totem demons to kill the scientists and anyone else that gets in the way. The film is a tonal shift for the series, from suspenseful puppet killings of mostly unlikable humans to good vs. evil battles in which the puppets protect their new human master from the totem demons. It’s more of a childish horror film than the previous entries, which were already leaning a bit in that direction, but I found it to be rather fun and well-paced. 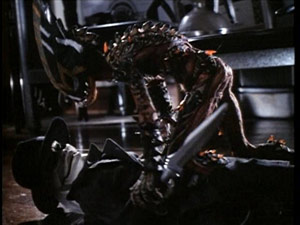 What really impressed me about Puppet Master 4 was the great direction from Jeff Burr. The screen is filled with vivid, fun imagery; captured with a keen eye and a clever moving camera. This obviously isn’t Gone With The Wind, but Burr is able to transcend a third sequel feel and really give Puppet Master 4 some distinct charm all its own. He’s also able to wrangle some pretty good performances out of the cast as well, who managed to draw me into the story instead of making me laugh at their acting. There’s definitely issues of believability with certain aspects of the characters, but I don’t like to discredit a film about puppets battling demons for not correctly relating a character’s motivations to me.

I struggled to place the film within the timeline set out by the first three films, but its incongruous nature doesn’t detract from the fun at all. For instance, Leech Woman is not around which suggests that this is post-Puppet Master 2, but if this is true then Torch should be here. Well, a glance above shows that he made the poster, but he’s not in the film. Guess Torch isn’t the punctual one of the bunch. The inclusion of Six-Shooter suggests that it is set somewhere between the prequel Puppet Master 3 and the original Puppet Master, but then Leech Woman should be here too and Jester wouldn’t have been made at that point. In any case, it’s obvious Full Moon doesn’t give a shit about continuity between series entries, so I shouldn’t think about it too much. I did like the small touches recalling the events of Puppet Master 3 when the trunk is found and cracked open. 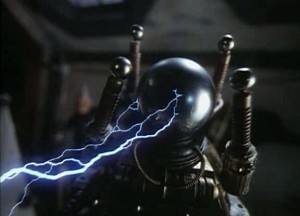 The totem demons are absolute terrors and have a fantastic screen presence. They look superb and whoever is specifically responsible for their design and modeling should be commended. They make for great enemies to our trusty puppets and they each get killed in delightful ways, including the play from page one of the Puppet Killing Playbook, where Blade and Pinhead hold the foe down while Tunneler tunnels in for the kill. This specific kill has Tunneler barreling right into the puppet’s mid-section and is satisfying unto itself, but it continues to pay off as our human hero picks up the ragged body in examination. There’s a few moments later in the film where the special FX aren’t quite up to par with the idea, specifically the hand-to-hand fight between Blade and one of the totems. It comes off as laughable and slow, because in an effort to save money it was done with puppets instead of stop-motion. Oh well.

Puppet Master 4 also signals the return of the tried and true method to momentarily thwart a puppet, throwing it against a wall. There’s even some slight variation as one puppet gets thrown into a car window. I can’t tell you how overjoyed and giddy I was to see puppet throwing return. I’ve said it before and I’ll say it again, it’s the little things in life.

This is easily my favorite of the series so far and I can’t wait till next week when I check out the concurrently shot Puppet Master 5 which promises to continue the fight against the demon Sutekh.