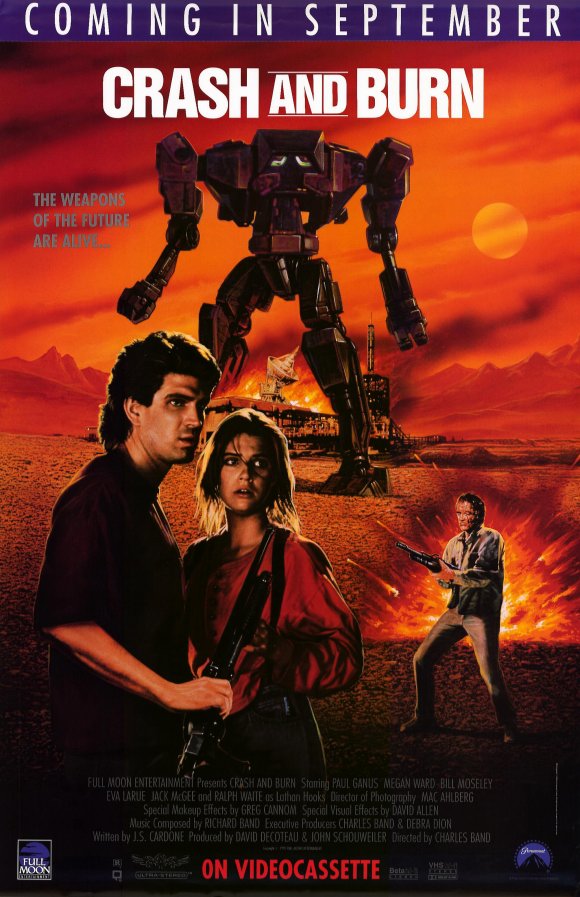 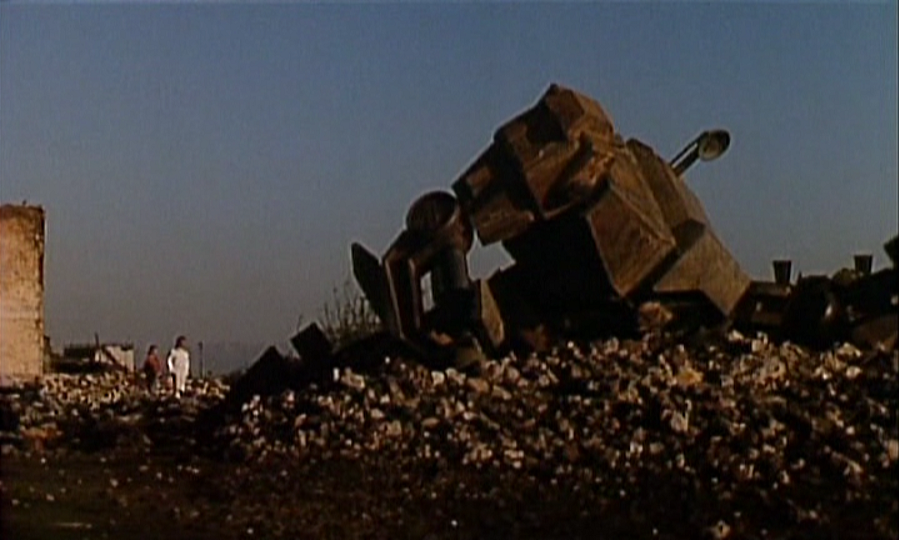 To this film’s credit, the sparse nature of the robots is most likely directly related to the bankruptcy of Empire Pictures caused by the abundant special effects and massive $10 million dollar budget of Robot Jox. I don’t have all the facts, but here’s what seems to be a fair representation of what happened. Charles Band is known for being able to crank out the movies. At the height of Full Moon in the 90s, they put out a film a month to video. Empire Pictures didn’t quite have that speed, but without a doubt they were moving at a similar pace. Robot Jox was in production for far longer than the traditional Empire picture, and they evidently went bankrupt after principal photography was completed, but before the robot special FX footage was finished. Band was committed to the movie and over the next two years got the special FX done so that it could finally be released in 1990.

Meanwhile, Empire had already finished their next film during this time, Puppet Master, and Charles Band made the decision not to release it theatrically, but instead direct-to-VHS under the newly formed Full Moon Entertainment, hoping it would end up being more profitable in the long run. This proved successful and provided the cash to finish up and release Robot Jox, and also start production on a number of other low-budget direct-to-VHS titles for the new Full Moon company. One of these was Crash and Burn. 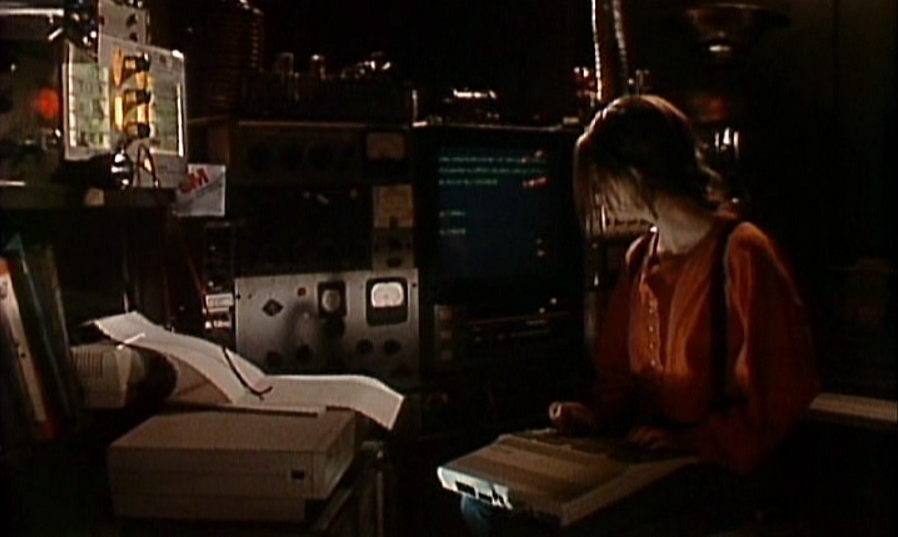 Given the circumstances, you can hardly expect this film to feature much more than what it has, but even with these considerations, Crash and Burn still isn’t all that good. The Earth’s monetary system has collapsed and been bought up by the Unicom corporation. Temperatures are at an all-time high and people must stay inside to avoid being fried in the ultraviolet rays of the sun. Even the Internet has collapsed! [Gasp!] Our hero is a Unicom courier, traveling on his motorcycle through the desert to deliver some goods to one of the few remaining television stations. When he arrives he gets more than he bargained for. A thermal is on the way, which will raise temperatures to extreme levels, forcing everyone at the station to hunker down and wait it out. When one of the group is murdered, it quickly becomes apparent that there is a Unicom synthoid in their midst and he must be ferreted out. At this point you might ask, but if they’re stuck inside, where are the big robots I was promised?

To be honest, there’s only one robot and it’s in a broken, slumped heap outside the TV station. He makes his first appearance about ten minutes in, whetting the appetite for when they can resurrect the lumbering beast and get this show on the road. The robot makes another brief appearance a whole forty minutes later, in an attempt to revive it that only has his lights turning on and a brief twitch of his body. What a tease! Finally, twenty minutes from that point, the robot is brought back to life to fun but underwhelming and quick results. This robot isn’t a mechanized warrior, equipped with heaps of crazy weapons and prototypes. Instead it is a mining robot with only basic functions. It still looks awesome and totally commands the screen when it’s active, but for Robot Jox junkies looking for another hit, Crash and Burn just isn’t gonna do the job. 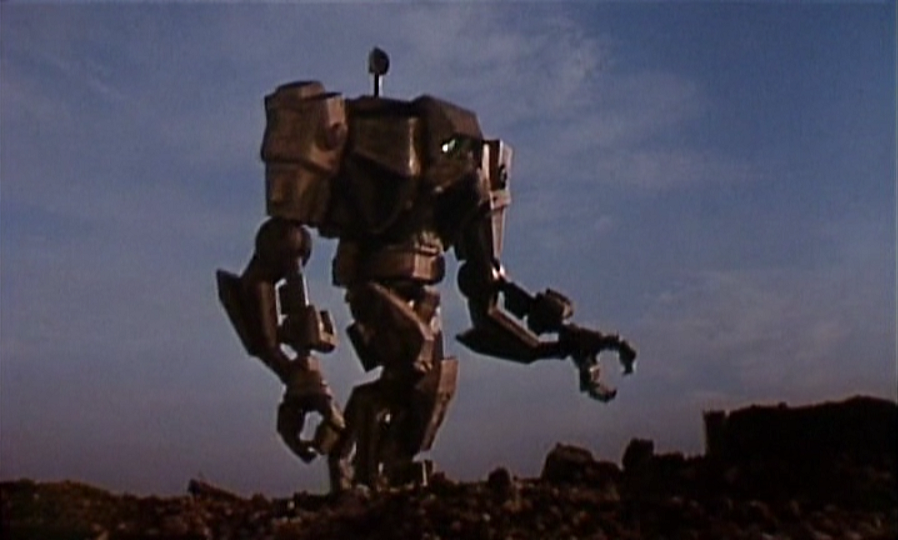 The horror aspects of the film are nothing better than OK, and as they’re all derivatives of better films, there’s no real reason to recommend this over them. If you go in with the right attitude and the right expectations, this could be a fun distraction though. You really have to watch this as a “stuck in a location being hunted down by an unseen killer” horror film that also happens to have a giant robot climax, instead of going in expecting Robot Jox 2. Hardcore Full Moon fans should definitely check it out for completionist reasons, and also because it is the lovely Megan Ward’s first movie. She later went on to play Jack Deth’s wife from the future in the second and third Trancers films.  Full Moon has one other giant robot movie, 1993’s Robot Wars, so hopefully that delivers more of the robot battles that made Robot Jox so awesome. There’s two robots fighting on that cover which gives me hope, but I should probably learn my lesson about expectations based on boxart after watching Crash and Burn.

Next Tuesday we jump forward in the Full Moon timeline to 1997’s Hideous!, a film I saw the trailer for on The Creeps VideoZone featurette and it looks awesome…and hideous! Can’t wait.